Top 26 Noirs    21-26
​It was very difficult finishing up my list. I feel secure in my top twenty, and don’t see them being omitted in a future list; contingent upon my future not being all used up. It’s different for the bottom five.  There were many I could have justified being on this list. Some were, Tomorrow Is Another Day, Tension, Black Angel, and K.C. Confidential to name only a few.  A big plus in making this list, and developing my own criteria for a film noir, was I watched a whole lot of good movies. Every film I have here is worth multiple viewings, as are most of the ones that did not make it.
21 Double Indemnity
22 Where The Sidewalk Ends
​23 Fallen Angel
24 The Big Heat
25 Detour
​​26 Blast of Silence

21  DOUBLE INDEMNITY: For those who ask why Double Indemnity is so low, I say, why not? I’ve got a full review of the film here. For me it didn’t’ hold up as well when I saw it last. Fred MacMurray is as out of his league in acting compared to Barbara Stanwyck as Walter Neff was out of his league in duplicity to Phyllis Dietrichson.  The saving grace is Edward G. Robinson whose presence is indispensable.  As I mentioned in my review it’s a waste of talent that neither of them exchanged lines in this movie.

22  WHERE THE SIDEWALK ENDS:
​Det. Sgt. Mark Dixon (Dana Andrews) is a second generation cop.  Inspector Foley (Robert F. Simon) tells him he’s received twelve more legitimate citizen complaints about Dixon's using excessive force while performing his duties. The next complaint will get him demoted. A possible reason for Dixon's zealousness is explained by his old man being on the take and he doesn't want anyone to think he's a chip off the old block. Dixon's ultimate goal of purging himselffrom the sins of his father is by taking down crime boss, Tony Scalise (Gary Merrill).

23 FALLEN ANGEL:
Fallen Angel is a tale of two women; Stella, played by Linda Darnell and June played by Alice Faye.  June is prim, proper, comes from a well respected affluent family and is saving herself for marriage. Stella is a world weary, been around the block waitress who wants to trade trips around the block for a white picket fence and a man who can support her; and she’s not too picky who that man might be.

Dana Andrews is Eric Stanton. (Stanton is a name noir fans should find familiar).  He used to run his own public relations firm back East, but he’s had a run of bad luck. Stanton arrives in town with one dollar in his pocket. He immediately heads to Pop’s Diner takes a look at Stella and it’s lust at first sight. 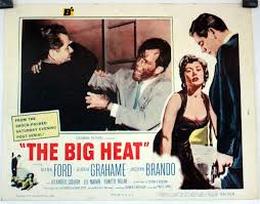 24 THE BIG HEAT:
The Big Heat appears to be the standard man seeks out and avenges the person or persons responsible for the death of a family member film. ​But with any Fritz Lang film there is more to it than meets the eye.  In this movie however those who help him find the killers are the ones who get killed. In addition Lang takes a cynical, if not misogynistic look at the status of women in film and  American society in the 1950’s.  To read the full review click the link.

25 DETOUR:    If films like Double Indemnity and The Maltese Falcon are the Makers Mark, the Chivas Regals of film noir then Detour  is house whiskey  for those who like their liquor hard and want to get drunk fast.   But, I have come not to condemn Detour, but father recommend Detour; for Detour is indeed a worthy film and certainly one of the finest B movies of all time.

The credit for this gem is Director Edgar G. Ulmer. He directed The Black Cat, and was on his way up the corporate ladder but chose instead to eschew the big studios because he, “…didn’t want to be ground up in the Hollywood hash machine.”   Director Edward Ulmer is no slouch. He knew what he was doing with his limited resources. He has taken major elements of film noir, including a torch song that is heard throughout, and tweaks each each element to make Detour unique instead of a run of the mill  genre clone.
​ Click to read my full review.

26 Blast of Silence:
​A case can be made that Blast of Silence, and not the generally accepted, Touch of Evil, is the last of the classic era film noirs.  This unappreciated low budget gem from 1961 has many of the accepted tropes familiar with classic film noirs; urban settings, a morally ambiguous protagonist haunted by his past, a woman who spurns his advances, bleak settings, location shots, a narrator, excellent cinematography and a bona fide creepy bad guy.

The hit-man is Baby Boy Frank Bono, played by Alan Baron who also wrote and directed the film. Bono has been hired to do a hit on a mobster. But Baby Boy is not the hit man to which we’ve become accustomed. He has issues.  The film starts with a train going through a tunnel with the proverbial light at the end rapidly approaching.  We hear a woman scream, the sound of a slap on bare skin, a baby’s cries; Frankie enters the world of the living, and it will not be a happy life.  It’s an impressive opening to an impressive movie.