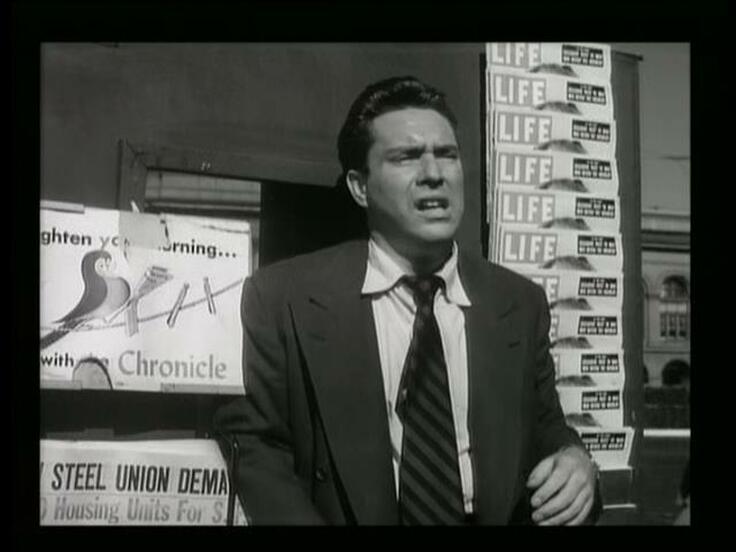 "All I Did Was Notarize A Bill of Sale" 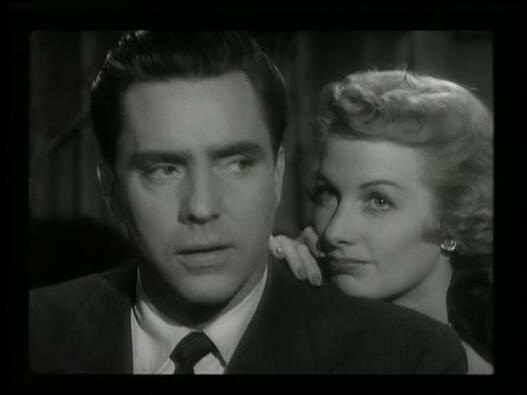 Frank Bigelow walks briskly down a courthouse hallway. He has been a dead man walking for almost forty eight hours. He enters the police department and without hesitacion calmly informs the police "I'd like to report a murder." Whose murder he is asked?  "My own," he replies. And so begins, D.O.A. a film that has not received the recognition it deserves as an excellent film noir.

D.O.A. gets a bum rap. Viewers who have no problem listening to ninety minutes of zither music while watching The Third Man or overlooking cars driving on the wrong side of the road in Detour, can't get over a few wolf-whistles in the beginning of a movie. Some question if it even is a noir.  In many ways the movie has many traits of an Alfred Hitchcock movie.

Frank Bigelow (Edmond O’Brien) is a big time accountant in a small desert town seven hours south of San Francisco. His secretary wants to marry him but he’s not sure if he's ready. He'll know for sure, he tells his girl, Paula (Pamela Britton) after he spends a weekend alone in San Francisco. Frank Bigelow is not the typical noir protagonist.  He is a good, honest law abiding citizen. He will be tempted by two femme fatales, and eschewing proper noir procedure will reject them both.

As soon as he registers at the hotel he faces temptation. Pretty girls appear like popup ads on a website. For who knows why, the producers insert a wolf whistle every time a pretty girl crosses the scene. Film goers have been accustomed to last second rescues and a happily ever after ending. For those people, these light-hearted moments might suggest a surprise ending; an antidote might be found at the last minute perhaps. We hear no more of them once Bigelow leaves the hotel. 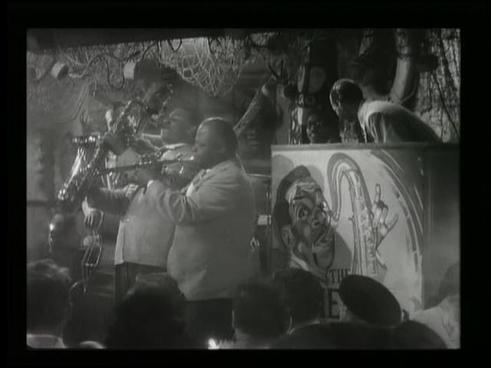 ​His fidelity is again tested when he is asked to join a party across the hall from his room.  He is single, good-looking and draws the attention of a couple of the wives. One openly flirts with him and her husband shows his displeasure. The entire party leave for a  jazz club on Fisherman's Wharf.  Before they do he gets a call from Paula.

She tells him a Mr. Phillips has been calling. Frank can't recall the name or doing business with him. When he and Paula talk on the phone the music switches from the loud blaring music coming from the party across the hall to when Frank talks, and when Paula talks we hear a flourishing romantic score replete with violins. At this point we still don’t know if he will cheat on her or not. This brings to mind those cartoons we've seen when someone battles with his conscience. On one shoulder is an angel telling him what not to do and then is bumped aside by the devil telling him to go for it. When the scene ends we think Frank's better angel has won out.

Nightmare Alley, They Live By Night, and Pickup On South Street take place in their own particular ‘world of noir. The scene at the jazz club has that same feel. Most noirs have torch singers, but with  D.O.A. it's a fuel injected rocket propelled jazz band. There are a few well heeled tourists but most of the patrons are college age, attractive, presumably well educated. The bartender refers to them as, ‘jazz connoisseurs.”  Bigelow  sits with the group he met at the hotel alongside his attractive dance partner. Her flirting is bold and obvious. Her husband is angry and we think he might be the one who will have something to do with Frank's murder.  It turns out to be misdirection. Frank escapes her clutches and takes a seat at the bar. ​ 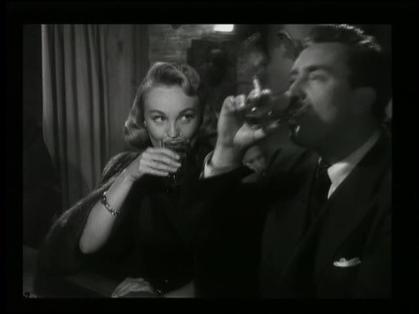 It’s not long before hound dog Frank sees a blonde (Virginia Lee) sitting alone at the end of the bar (a noir favorite) and buys her a drink. He does not notice the man who stands behind him. She has all the accouterments of a femme fatale.  She is blonde, attractive, rich, bored, has a mink coat, loose morals, a convertible and is jive crazy. The music changes from the blaring, daring and sexually charged jazz music to the baleful strains of a torch song melody. When he moves over to her he fails to bring his glass and the stranger switches his drink. Frank and the blonde make a plan to meet up later.  His drink is brought to him, and when Bigelow takes a couple of swallows he's a dead man. But, why?

He returns to the hotel to call the blonde and set up a rendezvous. His attention is caught by the vase of flowers and a note sent by Paula. He puts the phone down and tears up the number. He has decided to be faithful to Paula and marry her when he returns home. His moral character has been tested and he has passed the test. When he wakes the next morning we hear the echoes of the same torch song from the previous night. He feels miserable and suspects it's more than a hangover and leaves to see a doctor.

The doctor's initial prognosis is negative but alarm bells ring when he consults a specialist  (Frank Dobkin) who tells him he’s been poisoned and there is no cure. Bigelow angrily dismisses him and finds another doctor who confirms his condition and adds this kick in the rear; had it been caught within twelve hours the poison could have been washed out. When Bigelow cannot tell him when or where this might have happened, the doctor explains it had to have been deliberately planned.
"I've got to call the police, this is a case for homicide."
"Homicide?"
"I don't think you fully understand, Bigelow, you've been murdered.” 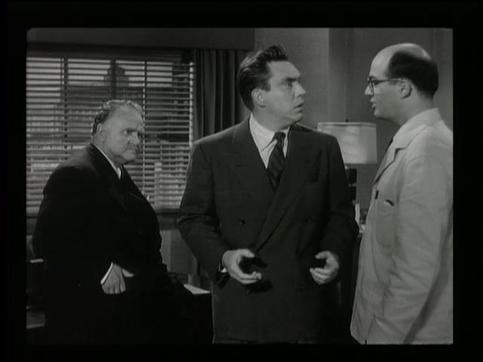 At that point the film switches gears into a great who done it and why story. There is a connect the dots approach to the plot so when everything is revealed it fits in nicely and logically.  The film frustrates us with false hopes and false leads, yet we are given enough hints and clues so D.O.A. is not  incomprehensible. The plot is convoluted, as are all mysteries, but unlike the much ballyhooed, The Big Sleep it does not seem as if it were made up while filming. The viewer is not cheated by some out of the blue scenario.

Edmond O'Brien never cheats the audience, and there is no better example than D.O.A.  There are great shots of him running down crowded San Francisco streets and darting through traffic. He stops at a corner newsstand on the way to the jazz bar. Behind him are rows of LIFE magazine. A young lady approaches, smiles and waves and her boyfriend greets her. He picks up a loose ball and gives it to a young girl. The background music is, “The Blue Danube.”  Life must go on.

The jazz club is closed until evening, and the guests have checked out of the hotel. He gets a call from Paula. She tells him six months ago he had notarized a bill of sale for Phillips for a third party and adds Phillips died yesterday; the same day Frank was poisoned. And with that one small lead his investigation begins in earnest.

A staple of film noir is we are not led to expect a happy ending, and we are told as much early in the film. There is no ruse or some miracle antidote to save Frank. Another noir staple is the protagonist will pay for something he has done in the past. This is true in D.O.A. but differs as there was no crime, no wrong doing by Bigelow and he has no idea what he did or why he will pay a price. 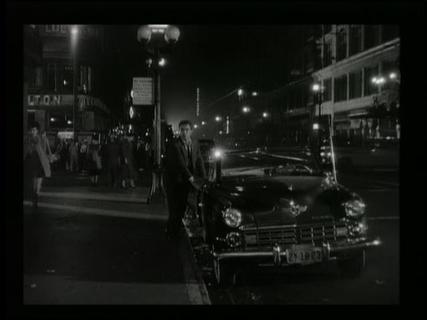 The corner drugstore is a long time noir favorite. No corner drug store has been better served than in D.O.A. The highlight is when a good guy, the druggist, with a bottle stops a bad guy, Chester (Neville Brand) with a gun. I liked the shots when Marjak (Luther Adler) drives alongside the bus that carries Bigelow. And if that wasn’t enough there are interior shots of the Bradbury Building. Rudolph Mate, the director, was the cinematographer for, Gilda, To Be Or Not To Be, The Hamilton Woman and may have added some of his expertise in this film as well. ​ 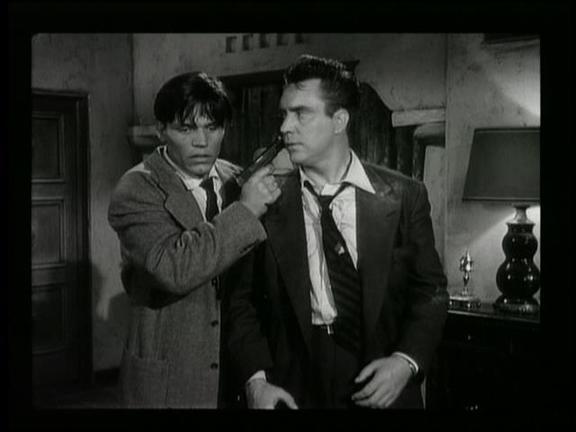 ​The best noirs usually have a character, or supporting actor whose performance not only adds to the film but leaves an indelible mark. In D.O.A., that actor is Neville Brand.  He's in some of the most important scenes. Chester proved you don't have to place a gun on someone's temple and shout profanities to threaten a guy. Chester's method is to shove a gun into someone's stomach as he simultaneously comes across with his elbow  into Bigelow's 'soft' belly.  It's great when his co-thug asks him to stop and Chester smacks him in the mouth. My favorite line of the movie is when Chester tells him:
"I'm going to like killing you. I've killed guys I could have liked.
But, I don't like you."

Luther Adler’s Marjak is a welcome respite and a direct contrast to the frenetic pace and urgency of the movie. Marjak dresses in cool colors. A white suit, a very light colored tie, and has white, or silver hair. He has a soft, middle-eastern accent, his tone of voice is measured and calm. He is a gentleman. He apologizes for Chester. He explains Chester is an unfortunate boy. He's a psychopath who is happy only when giving pain.  Adler leaves a positive impression on the film and adds to it almost without notice.
Bigelow eventually finds the man who poisoned him. He tracks him down to his office in the Bradbury Building, and after a short scuffle Bigelow shoots him.

​Frank Bigelow personifies the typical American male. He likes to have a beer with lunch, a few drinks at a party, he likes his ladies, and unlike many noir protagonists, is an honest man. He is also, in another an over-looked profoundly American noir theme; a man not to be screwed over. 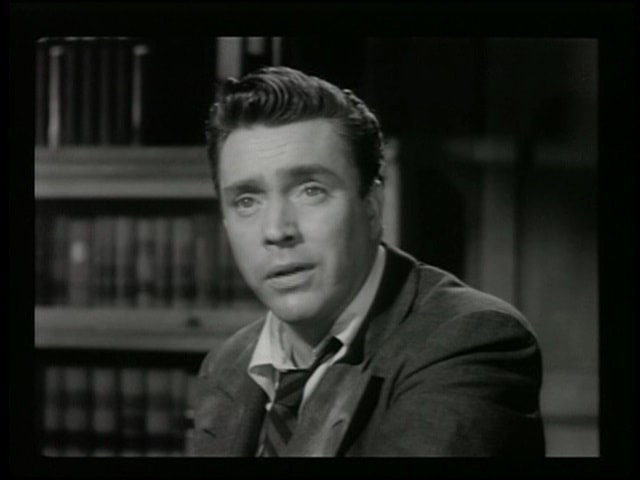