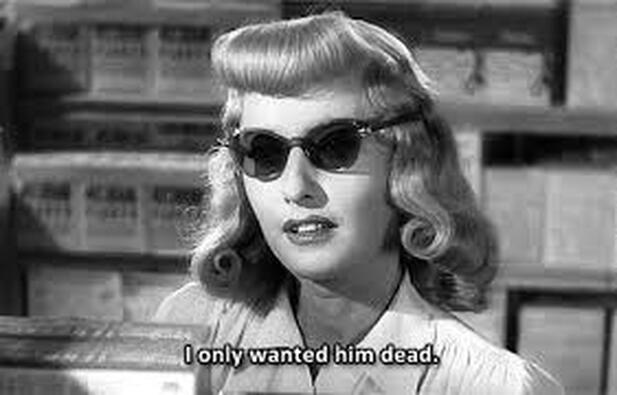 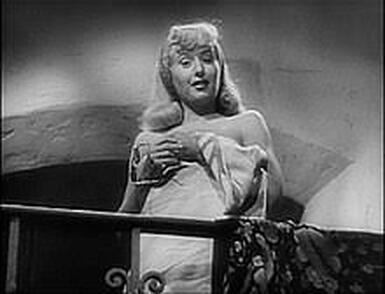 A few years ago I would have had Billy Wilder's  Double Indemnity in my top five, so what happened?  For one there are more films that fit into the criteria I used to compile my list of Top 25.  The major reason is it didn't hold up as well as when I last watched it, and it might be that much of the film's popularity is due to its quirks or gimmicks. It’s  a certainty any discussion of the movie will bring out scores of comments about the wig that Barbara Stanwyck wore, her sunglasses, her anklet, which is as much an iconic prop as the statuette in the Maltese Falcon.  The anklet has the power to make Walter Neff (Fred MacMurray) salivate upon sight and then commit murder, and though briefly mentioned, entice Mr. Dietrichson to marry Phyllis so soon after his wife’s unfortunate demise.  Then there is the overuse of, ‘baby.’ A drinking game based on the amount of times ‘baby’ would result in more kids passing out than bobby soxers at a Frank Sinatra concert.  And for me, Fred MacMurray doesn’t add much to the film.  Barbara Stanwyck and Edward G. Robinson prove once again why they are two of the best actors this country has produced. This is film with great dialogue that Robinson and Stanwyck devour like hungry lions whereas MacMurray tends to nibble. 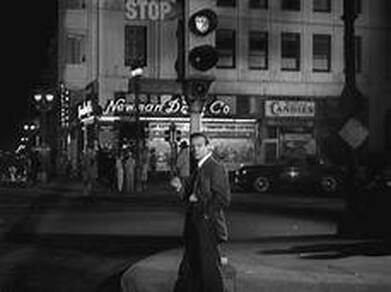 Zachetti wating for Lori. A great example of Grade A noir cinematography.
When I began working on my list, I already knew what I liked and didn't like.  I like a noir with a good sub-plot.  Fallen Angel, Night and The City and, The Maltese Falcon have it; Double Indemnity doesn’t. There is a minor sub-plot about a clandestine relationship between Lori Dietrichson, (Jean Heather) and her n’eer do well boyfriend Nino Zachetti (Byron Barr). Their story comes across as weak and uninteresting. Lola was a device for Neff to learn about Phyllis.  It could have been expanded into where Lola was used as a wedge between Neff and Phyllis.  It was key in making my list that a film noir display all sides of the human equation, not just the criminal, or the depraved. There should be moments in a film noir that delve deep into our sensitivities and touch the soul. 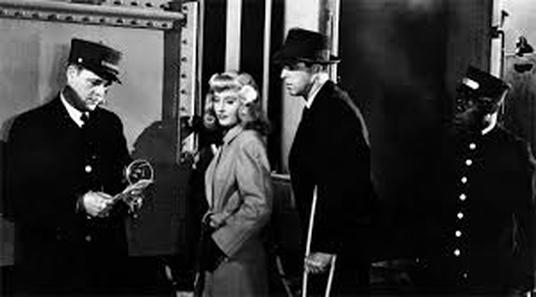 ​In a film with Edward G. Robinson and Barbara Stanwyck one would expect excellent acting and one would be right.  It would be hard to think of any film where she did not deliver an excellent performance. But, there is not much depth to Phyllis Dietrichson. No one is better than playing complex women than Barbara Stanwyck.  She could have played Phyllis Dietrichson in her sleep.  When given the opportunity to show her talent she delivers.

The first example is when she meets Walter for the first time. She crosses her legs which gets Walter all keyed up, uncrosses them to calm him down, and then when she's ready to get down to the business of murdering her husband crosses them again. Her attitude, her demeanor, her soft tone and cadence of speech give an impression of an articulate upper middle class woman. But she doesn't fool Walter. Not with that anklet she doesn't fool him. He knows they are cut from the same cloth.

The first twenty or so minutes of Double Indemnity is as good as it gets. Walter and the audience are hooked the first time Stanwyck appears at the top of the stars; and she makes  sure they stayed hooked. Then there is the scene  when she meets with the company President Norton (Richard Gaines), who is there with Walter Neff and Barton Keyes.  She knows what worked on Walter will not ​work on Norton or Keyes. She acknowledges them with benign indifference then a subdued reaction of surprise when she 'learns' about the accident policy;  she displays anger at Norton’s affront and then a controlled, deliberate, though heart-felt absolute disgust towards him as she leaves the office. 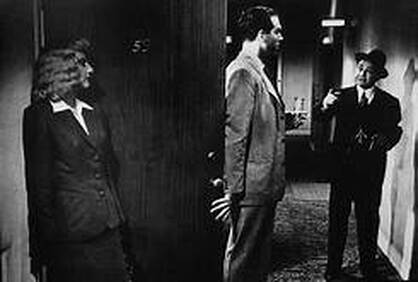 Double Indemnity has two icons in the same film, yet they have no scenes where they interact with each other. Two of America’s best actors, and Chandler or Wilder could not have added a scene where they verbally spar?  A sports analogy for those old enough to remember, is like having Bobby Orr and Bobby Hull on the same team but never on the ice at the same time.
​
The star of the film is E.G. Robinson. He brilliantly develops the complexity of Barton Keyes. Barton Keyes is a numbers cruncher and proud of it. He is also a top notch detective. He destroys Mr. Gorlopis’ insurance claim like a Charlie Chan or Sherlock Holmes, then casually dismisses his accomplishment as something so easily solved to be an insult to his intelligence. 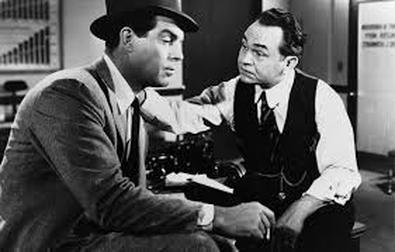 There is a coldness to Keyes that comes from a life predicated on suspicion, cynicism,research, figures, graphs and charts on a page. His job and his life are inseparable. Neff kids him about him checking on his fiancé, yet from Keyes’ point of view it makes sense. He  investigates fraudulent claims and if he can play detective with people trying to defraud his company of a few dollars, then it’s wise to practice due diligence on a woman who might become his wife.

He is a man who likes to be in control. Unlike a detective who has to pass the fruits of his labor down the line to a prosecutor, then judge and finally jury, Keyes only has confidence in himself so in order to get the job done he must necessarily take on the role of all three. And we get all of these complexities; all of the richness and depth of this middle-aged bachelor from relatively brief appearances by E.G.Robinson.

The lack of a suitable sub-plot could have been solved by developing the relationship between Neff and Keyes. The bachelor has taken a father/mentor attitude towards Neff, who is good at his job. He has been the top agent two months in a row, yet nothing about him shouts success. He's not a flashy dresser, doesn't drive a fancy car, and to top it off  lives in a nondescript apartment with a door that opens the wrong way! Barton takes it upon himself to make sure Neff doesn't waste his talents.

When Neff lights Keyes’ cigars it is a sign of filial respect. It’s no different than a child bringing the daily newspaper to his father.  When Keyes offers him a chance to work alongside him it's no different than a father preparing his son to take over the family business. He won't take Keyes up on his offer of a promotion, and why should he? Walter is settled nicely in his comfort zone. He’s doing all right using his good looks, glibness and well practiced spiel. Sometimes it results in a new policy and sometimes a babe like Phyllis. Keyes is hurt when Neff turns down his invitation. Sure, Neff has to take a substantial cut in pay, but for Keyes’ it’s nothing compared to working with, and learning from the best. 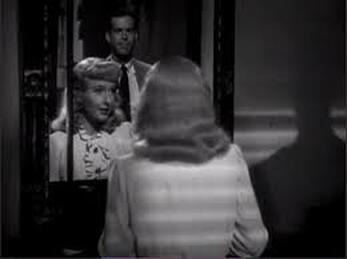 But that relationship is never fully developed. This is a case where a more talented actor than MacMurray could have been used. I’ve seen nothing in his previous films that would have prepared him for this role. It could have been the studio was trying to break him from his usual light hearted roles into the dramatic, darker films.

Double Indemnity is split between Neff /Dietrichson and  Neff/Keyes.  Save for that first half hour MacMurray, in comparison to the two, comes across as wooden and often awkward. A good actor knows how to deliver a great line, much as a good comedian, or story teller, knows how to deliver a punch line at the end of the joke or story. MacMurray doesn’t do that. An example is when he is told by the maid upon entering the house that the liquor cabinet is kept locked. That’s a good line. He answers with an equally good line that it’s okay as he always brings his own key. But it’s said so non-nonchalantly almost as a throwaway line that it loses its impact. When Phyllis tells him she’s been sun-bathing he tells her that he hopes there were no pigeons around. Those were two good lines that deserved a rim shot, but both come out flat.

In fairness to Fred,  his lack of experience in dramatic and crime movies was what Wilder wanted. He wanted someone who would come across as out of his league when matched against Phyllis and Keyes. 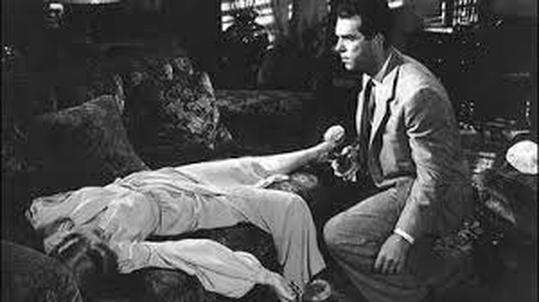 The ending borders on laughable. He calls Phyllis ‘baby’ twelve times. He is shot, and dares her to shoot him again but she can’t. Why? Because it wasn’t until she couldn’t pull the trigger a second time did she realize she loved him. Talk about tough love!

But, there’s more. He doesn’t abscond. Instead he drives to the office and records his confession to Keyes and when Keyes shows up he asks for an hour head start. Other than being a device to tell his story, the confession comes across like an adolescent gloating how he got one over on his old man.   As he lay dying he says he states their working situation made Neff  too close for Keyes to figure out it was him. Keyes tells him they were closer than that. Walter's final words of, "I love you too," sound as sincere and heart-felt as when Gorlopis thanked Keyes on the way out of his office.

Don’t get me wrong. This is an excellent movie. And as I wrote in the beginning, the curiosities of the film, the wig, the anklet, the scene at the supermarket, which make fodder for spoofs,tend to over shadow and take up too much discussion over the merits of this film. Double Indemnity is a classic, and Edward G. Robinson is the biggest reason for it.
The first clip I have is the initial ‘sit down’ between Phyllis and Neff.  You can't do much better than this scene. The dialogue is great. Stanwyck has him eating out of her hand as she did Henry Fonda in, The Lady Eve. 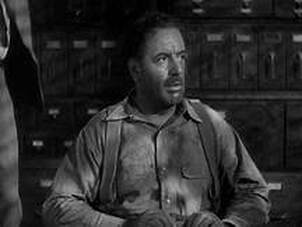 This is the scene with Barton Keyes and Sam Gorlopis. It’s a great scene helped with the effective performance of Fortunio Bonanova. The writing is superb. I get a kick out of the euphemistic,  'sez you,' 'sez you,' exchange.  When the fraud is discovered Gorlopis looks pained. “I’m not feeling so good, Mr. Keyes," and gets up to leave.  When Gorlopis signs the waiver Keyes tells him, “Now, you’re an honest man again.” It gets funnier when Bonanova waits for detailed instruction on how to open the door and when he does flashes a smile of achievement. E.G. delivers, and in this case his counterpart does as well. You do not outdo E.G. Robinson for he's the Kahuna;, rather you surf his giant wave.
The thirds is when Keyes offers Neff the job, and the fourth is when he tells Neff he will deny Phyllis’s claim. Check out E.G.'s final look.