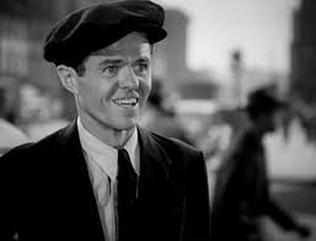 Elisha Cook, Jr. was usually cast as the as the weak, put down, neurotic, wannabe tough guy. Whether it was confronting Jack Palance, Lawrence Tierney or Humphrey Bogart or trying to make it with women like Ella Raines or Marie Windsor, his character never knew when he was out of his league. Had his character a philosophical bent it would been along the line of Robert Browning’s quote, “A man’s reach should exceed his grasp/Or what’s a heaven for?”  Often Cook had so little screen time his character was only given a nickname, ”Sweeper,” “Inky,” “Banjo,” “Shorty,” or he’d be referred to by the role he played like ‘piano player,’ ‘crazed drummer,’  or ‘taxi driver.  His high water mark was in Magnum P.I. (where he had twelve appearances) where not only was he given a first and last name but also a nick-name any tough guy would be proud to have:  Francis(Ice-Pick)Hofstetler.
One of the most memorable performances of his  over 215 screen credits is the hop headed drummer who tries to put the moves on Ella Raines in,  “Phantom Lady.”   I don’t think there’s been a worse case of an actor faking an instrument.  He’s had memorable roles in “House on Haunted Hill,” “Electraglide in Blue,” “Rosemary’s Baby,” ”A Kiss Before Dying,” and scores of television appearance.  He might be remembered for his role as Wilmer the gunsel in,“The Maltese Falcon.” . Gunsel has two meanings:, a small time hood carrying a gun and  is also a Yiddish slang for a young man kept by an older man. The relationship is evident in the film, and Elisha’s performance carries it to a higher level.  He’s comes across as much a maladjusted kid trying to prove to his boss he’s more than a sexual distraction, as he does a killer.  “I can always get another son,” the Fat Man says when choosing to give up Wilmer for the Bird.

The poor gunsel has to wear an oversized overcoat with sleeves that reach down to his wrists!  Don’t tell me wardrobe couldn’t find a better fitting coat if they tried. Makes you wonder if Wilmer wasn't wearing the hand me down of a previous ‘son’ of the Fat Man. Cook brings a sensitivity to the role that almost makes us feel sorry for the guy. In a film replete with great performances, Cook’s is right up there with  them. 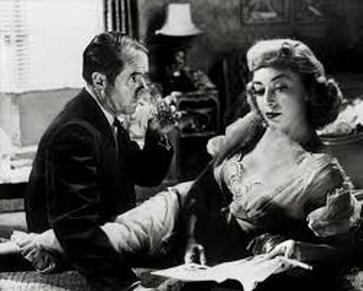 I think his finest performance is in,The Killing.  He plays a race track clerk married to Marie Windsor the film’s femme fatale. It is their mis-matched relationship that elevates a good movie about a heist job gone awry to a truly memorable film. We shake our head equally between wondering how does Cook have a chance with her and what was she thinking when she married him? They are a true film noir couple.  They put the film-noir into The Killing.
He’s the chump who will do anything for her, but he's no bigger a chump than Fred MacMurray in, Double Indemnity or Burt Lancaster in, The Killers.  ​ And give Elisha credit:  he gets to passionately kiss Marie Windsor, watches her parade around their apartment in her slip, gets to kill those who wronged him, and despite his face being riddled with buck shot, drives to his apartment, confronts his wife and kills her before he dies. This film, just like Night and the City, benefits greatly from a wonderfully scripted sub-plot, interwoven throughout the entire movie.  It is the interplay between Cook and Windsor that make The Killing a film-noir classic. 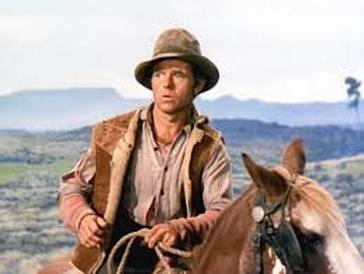 As Stonewell Torrey in Shane, Cook plays an honest, hard working family man with a fierce duty to principle and a refusal to be bullied.  Cook gives us one of the filmdom’s most memorable scenes.  When accompanying another homesteader to the blacksmith he is accosted by Wilson(Jack Palance). We see the poor guy walking tentatively through the mud towards the saloon where Wilson is waiting. He almost slips in the mud at one time. There is no drama in this scene, we know what is going to happen and Cook does a great performance as a sheep being led to slaughter.  Through a previous encounter Wilson knows how easily it is to rouse Stonewall’s temper and does it by insulting Torrey’s Southern  heritage . Cook responds by calling him, “…a low down lying Yankee.”  “Prove it,”  Wilson says and pulls his gun before Torrey can barely get it out of his holster,  then kills him.  This scene is a precursor to to the film's finale; the shootout between Wilson and Shane.
​
Elisha Cook's character is accepted by his community and is an important part of the homesteading community.  Joe Starret(Van Heflin)convinces a family not to leave until Torrey has had a decent Christian burial, and Shane, in his own way honors him, by calling out Wilson with the same words Torrey used.,