Chief Wild Eagle: Leader and CEO of the Hekawi Indians 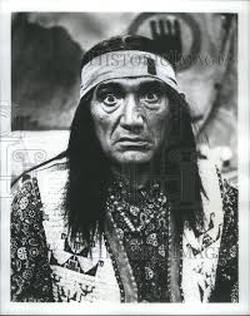 Frank DeKova had a 31 year career in show business, beginning in 1950.   He often played the bad guy. His debut was in Viva Zapata where he was the Colonel who set up Zapata’s assassination.  One of his first starring roles was in the classic detective play "Detective Story", which got him noticed and brought to Hollywood. He played mostly an assortment of gangsters, killers, gunfighters and Indians. But all of that paled in comparison to what was his most beloved role and that was the scheming, somewhat untrustworthy but very funny Hekawi Chief Wild Eagle, the partner to Forrest Tucker's Sgt. O'Rourke in O'Rourke's various schemes to make money. In the western comedy series F Troop (1965). Chief Wild Eagle was the hustler’s hustler, and I think that DeKova took this chance to play a role that was atypical a role to what he had been playing throughout his career.

One of the  shows predictable sthicks were the Indian proverbs, that were prefaced by Chief Wild Eagle's “wise old Indian saying,”  For the most part they made little sense, a fact that CWEagle once admitted when asked for an explanation.  Here they are:

-The Captain has been kidnapped by the Loco Brothers.  O’ Rourke ventures to the camps and asks Wild Eagle where they might be found, and if the Captain is in danger.  Wild Eagle says, “When owl smile at full moon bye bye blackbird”. When asked to explain;  “scratch him(Capt.Parmenter) off the list and hope the next Captain is as big a sweetheart". THE LOCO BROTHERS

-O’Rourke and Agarn go to the camp to warn Chief Wild Eagle, about an attack that will come by ballon.  An incredulous Wild Eagle opines:  “He who plants crop of rhubarb will lose moccasins in light of full moon.” No explanation is given.  BYE BYE BALLOON

- Wild Eagle is called to dinner. He laments he is tired of having buffalo steak, and says, "When field mouse see shadow/Time to string beads."   when asked what it means he says not know..nobody ever asked before.
HERE COMES THE TRIBE

-Agarn has decided not to re-enlist and joins the Hekawis.  This put Chief under such a big strain that he becomes ill. He tells O’Rourke “Cannot make fur coat from feather of goose”  When asked the meaning he answers, “Who knows, show you what strain I’m under?   ME HEAP BIG INJUN

-Captain Parmenter attends an advanced officer’s training program. He comes back a martinet.  O’Rourke is worried that the Captain’s new attitude might endanger his enterprise. Wild Eagle assures him that he’s come to the right man and offers this bromide:  “You show me squirrel with acorn/and I show you happy moose.”  Agarn suggests that he should wise up and cut out those wise old Indian sayings.  OLD IRON PANTS

-After a successfull  appendectomy operation that saved his lifeChief Wild Eagle says, “When tail of coyote wags at foot of possum/ bluebird of happiness will fly no more.” Crazy Cat, who has been hoping for the Chief’s demise translates; "It mean him win me lose.” MISS PARMENTER

-In this episode Wilton’s girl friend arrives at the fort to bring Wilton back to Philadelphia to marry her.  O’Rourke is worried that if the Great White Pigeon leaves O’Rourke Enterprises will go under.  Wild Eagle commiserates with these words of wisdom:  “Bark of tree never bitter to hungry squirrel.”  When pressed for its relevance he says it loses something in translation.  A little later Wrangler Jane shows up and she’s worried about losing her beau.   Wild Eagle offers theses words of sympathy.   “Sparrow fly high, but cannot build  dam with tail of beaver."  THE GIRL FROM PHILADELPHIA

-O’Rourke wants the Hekawis to kidnap a gunslinger who wants to kill Parmenter.  Wild Eagle protests.  O’Rourke reminds him that having Parmenter as the fort's Captain is good for business, and the Hekawis never had it so good.   Wild Eagle says:  “Hekawi have ancient saying:  Beaver cannot fly when horn of young buffalo point at full of Moon”  O’Rourke counters with his own words of wisdom:  “When great white pigeon fall from sky no more wampum grow on trees.”  Chief Wild Eagle is convinced.  DIRGE FOR THE SCOURGE.

-Agarn and O’Rourke visit the camp and tell the Chief they are having trouble at the fort.  Chief Wild Eagle tells them:  “If you have trouble must remember wise old Indian Saying, “Bullfrog who sits on lily pad Never do much croaking.”  Agarn says what’s so wise about that?"   "You know wiser saying?" Wild Eagle asks.  THE PHANTOM MAJOR.


Wild Eagle did not say all the wise old Indian sayings, this is from Milton Berle who plays Wise Owl, a tribal psychiatrist who administers a word association test for Agarn. When he is asked about the result of the test he says, “You always have empty teepee/When frost on buffalo nose”.  Agarn says, "Now that makes sense."  to which Wise Owl responds, “you need more help than I think."  THE GREAT TROOP ROBBERY 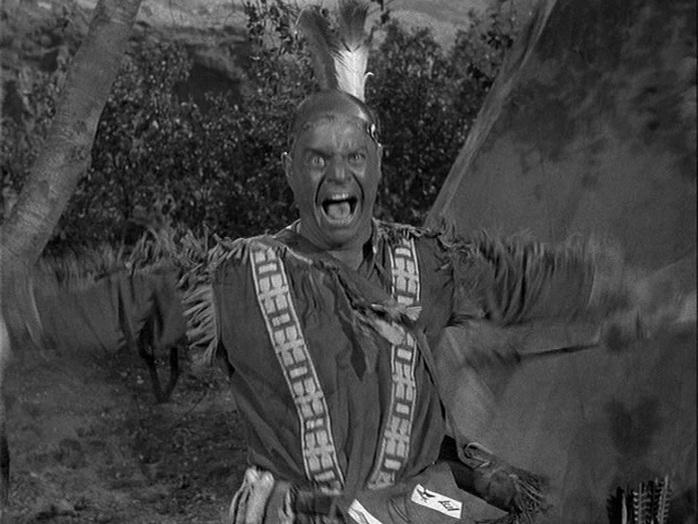 Don Rickles as Bald Eagle, exhorting his father, Chief Wild Eagle to kill all Yankee dogs.
Don Rickles plays Bald Eagle, One of Wild Eagle's sons, the other being the mentioned once, seen nonce, Boy Deer.  Bald Eagle says he wants to, 'kill, kill, kill.'  But, as we find out all he wanted was the love of his father.  The Return of Bald Eagle. 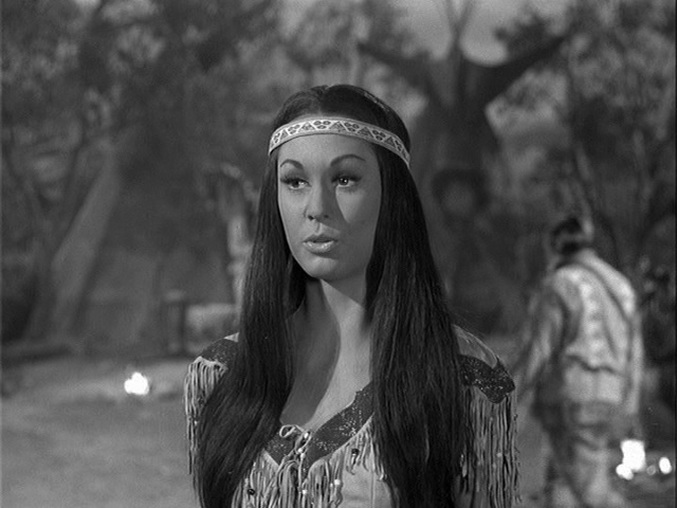 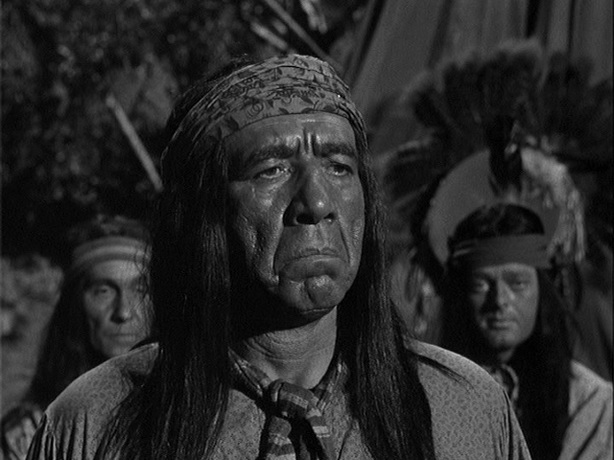 Geronimo vows to kill Agarn, who, to impress his sweetheart in Passaic, NJ, told her he killed Geronimo. She told Dad who ran it in the paper.
​Geronimo played by Mike Mazurki in, Our Hero What's His Name?  Who'd a thought he'd be kin to Chief Wild Eagle?  But he is.  He is either a cousin or nephew.  But Bald Eagle said he was jealous of his cousin Geronimo, as did Chief Wild Eagle.  So, who do we believe?  A crazy loon, or a sharp businessman?  So, for this site, Geronimo is Bald Eagle's cousin and therefore Wild Eagle's nephew.