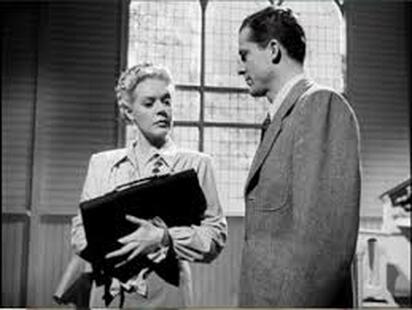 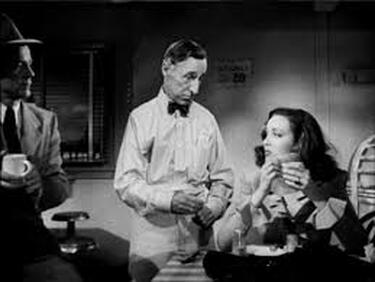 ​Fallen Angel is a tale of two women; Stella, played by Linda Darnell and June played by Alice Faye.  June is prim, proper, comes from a well respected affluent family and is saving herself for marriage. Stella is a world weary, been around the block waitress who wants to trade trips around the block for a white picket fence and a man who can support her; and she’s not too picky who that man might be.

Dana Andrews is Eric Stanton. (Stanton is a name noir fans should find familiar).  He used to run his own public relations firm back East, but he’s had a run of bad luck. Stanton arrives in town with one dollar in his pocket. He immediately heads to Pop’s Diner takes a look at Stella and it’s lust at first sight.
​
You can't blame Stella for being rude to guys who try to pick her up, but there's no reason for her to be mean to Pop. He's so happy to see her he gives Stella the food he prepared for Stanton. 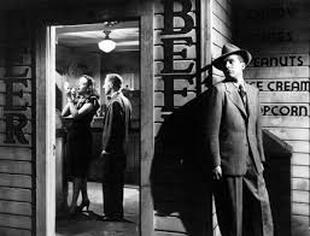 ​He will have to choose between Stella and June, and in the world of noir, the choice is obvious.  Stanton’s plan is to marry June, get it annulled and with her money, marry Stella. It’s a cynical and loathsome ploy. When we see how easily he cajoles and manipulates the innocent naif we wonder if it’s similar to what an older, experienced man might have done to a much younger Stella.

When he broaches marriage to them their opinions couldn’t be more different. June believes in the sanctity of marriage and will later quote from the poem, “Fallen Angel,”: "We were born…to seek out Heaven… But they who race alone shall stumble in the dark … for only two together can enter Paradise." Stella sees marriage as a bargaining chip to get her the ring, the house, the white picket fence. For June, marriage is a necessary mean to reach the kingdom of Heaven.

The star of the movie is Linda Darnell.  Stella is not only the opposite of June, but of Laura, Preminger’s previous woman of interest. We first see Laura by proxy in a beautifully drawn portrait hanging in a Manhattan apartment.  While we don't see an image of Stella, we are introduced to her by the men in the diner talking about her, wondering when she'll return or if she'll return. When she finally enters the diner she is  hungry and in disarray. She sets herself down takes off her shoe and rubs her foot. It appears her beau for the past three days not only didn’t drop her off at the diner, but left her with some serious walking to do.

Linda Darnell’s performance is the most memorable one in the movie. She simultaneously juggles Pop, Judd, Andrews and her new beau, Atkins, as well as any juggling act to ever appear on The Ed Sullivan Show. Darnell’s cool demeanor, her take it or leave it attitude, indifference to her potential suitors, and, ‘baby, I just don’t care,’ approach made me think of another actor with similar traits, and that would be Robert Mitchum and his ‘cool’ style of acting.
There are many great scenes of Stella's power over men. These are but two of them. 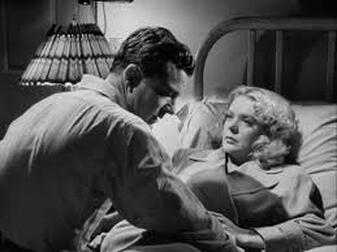 Alice Faye made her mark as one of the most popular actresses in musical and whimsical films, and like Dick Powell in, Murder, My Sweet wanted to change her onscreen persona. Her task was a bit harder. Powell had the already established Phillip Marlowe and his pliable sense of right and wrong as a foundation. Alice Faye had June who would not waver from her moral code. It would be up to Faye to convincingly add depth to the character.

There were scenes that supposedly would have shown June’s transition from an innocent to a woman fully confident of her sexuality but were deleted. Word is Darryl Zanuck was having having a romance with Darnell. He wanted to beef up Darnell's role (good idea) but at the cost of downplaying Alice's character (bad idea). I believe the deleted scenes came from the time she and Stanton are at the seedy hotel room in San Francisco.

.Stella gets murdered, June and Stanton get married. But when he is suspected for the murder, he intends on doing what he’s done for years which is to run away. He doesn’t want her money he tells her and he’ll get the marriage annulled. She says it’s no longer hers but theirs, and if he wants the money he can have it. But she wants the marriage to work and will not agree to an annulment. They consummate the marriage and June recites the poem.  ​ 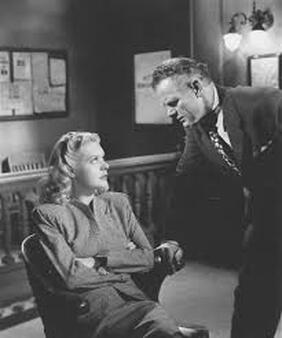 ​Fallen Angel has a very capable supporting cast. Ann Revere is effective as Alice, Faye’s protective spinster sister. Percy Kilbride is touchingly sympathetic as Pops. Pops is a forlorn character. On separate occasions Bickford and Andrews arrogantly bark at him to get their order, and he meekly walks away. His day is brightened when Stella shows up for work. Stella is indeed the only star in his life.

Every noir should have a tough guy, and there’s no one tougher than Charles Bickford as Mark Judd. Bickford’s characters always have a natural menacing look. Even in Song of Bernadette you think he’s going to take off his robes and kick some butt. Mark Judd seems to spend almost as much time at the diner as Pops and Stella.
​
Judd is a former NYC cop who left the force, not for health reasons as the people believe, but for beating suspects. We saw an example when he slips on a pair of kid gloves and administers a brutally efficient, professional beating to Stella’s beau (Bruce Cabot). Another is when he’s interrogating June, pacing about the room, running the same heavy ring that killed Stella across the room's radiators. You never know when he might explode.  Bickford’s performance as Mark Judd shows how an accomplished actor with an important part, constrained by screen appearance can lift a film.
The ending seems to be hurried. The murder is neatly solved. Stanton investigates Judd’s background. He discovers Judd murdered Stella. He confronts him at the diner. And tells him the police are waiting. Judd pulls a gun, Pop surprises him and Stanton disarms him. Judd goes off to jail, Pop back to his lonely diner, and Stanton joins June in the convertible as they drive happily into the night.
It's a good movie. I've enjoyed watching it before and will enjoy watching it again.

June is more complex of a character than Stella, who comes across as self-serving, mean spirited and mercenary. There are layers to June's psyche that deserved to be developed and the deleted scenes would have helped.