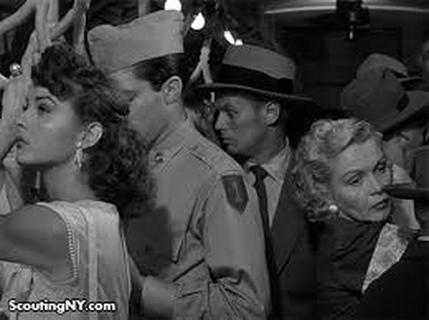 Director Samuel Fuller giving props to the 1st Infantry Division. The Big Red One.
​ On a hot, steamy summer’s day, inside a subway car with people packed like sardines, small time crook Skip McCoy (Richard Widmark) is on the job. With the hands of a master jeweler he easily picks the purse of the unsuspecting mark; lovely Candy (Jean Peters) who is as steamy and hot as the subway car. Widmark has moved from penny ante crook to an international player. He has lifted a roll of film with atomic secrets that are to be sold to communist agents.
So begins, Pickup On South Street.

The plot of treason and its far reaching geo-political impact is but a device for Fuller to show us a world of noir where petty criminals, small time neighborhood crooks and lonely people who do what they must to survive from one day to the next. 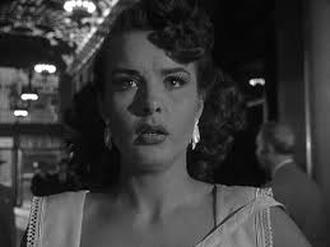 Widmark’s been in several noirs but this along with Night and The City, is his best performance. His most iconic role was as the sociopath Tommy Udo in, Kiss of Death. The role didn’t test his acting ability. He was supposed to be a murdering, sadistic, head-case and that’s how he played it. Skip McCoy gives him an  opportunity to show his range as an actor. McCoy can be menacing without raising his voice or assuming an air of bravado. He delivers every line with the effectiveness of an atomic bomb without the sound of the explosion. He is also compassionate and sympathetic.
​
Next to the word ‘sultry,’ in the dictionary should be a galley of Jean Peters’ photos from this movie. She is the willing dupe of her former boyfriend, Joey (Richard Kiley).  She displays a lot of tenderness, and loyalty for her men, one who took her away from a life on the streets and her new love (Richard Widmark).  She is street smart, yet  very vulnerable. 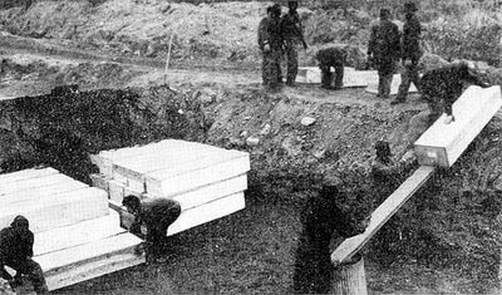 Photograph from 1930. Burying bodies in Potter's Field located on Hart's Island, NYC .
It is Ritter’s Moe Williams; the tie-selling, informant who fears a burial in Potters Field, that makes this film a classic. Without her the film would, as Samuel Fuller films do, press the edge of the envelope with themes of social commentary that bigger studios wouldn’t touch, but not be the acclaimed classic it is today. It is her touching performance that puts the noir in this movie. Ritter is a great actor, and a great actor can bring out the best from those around her. We see this when she and Widmark play so well off each other, and the same can be said with every actor with whom she shares the scene. The performances of the three stars cannot be overestimated. They make everything look so easy.

​I prefer my noirs not to be preachy about anything.  I have no problem with the anti-communist theme. There are times however when it gets repetitive. The film came out in 1953 which was the year the Rosenberg's were executed and the Korean War came to end. But, don't wave the flag at Fuller. He didn't volunteer at the age of 33 to fight against one tyrannical state ruled by a deranged mass murderer, only to be sympathetic to another deranged mass murderer. Fuller hated bull-shit. About WW2 he said, "Even World War II, with all its idealism..., basically there was a lot of hypocrisy...  what the rich were saying was, 'We loaned a lot of money to Europe that we're never going to get back if Hitler wins.'  And about Korea: "...they called that one a police action, to which the bone-weary dogface replied, 'Fine! Send in the cops!"' There were times I felt the 'dirty communist' theme went overboard but it did not take away from the overall brilliance of the movie.
​
The film is about loneliness, despair, alienation, and the everyday struggle for survival. 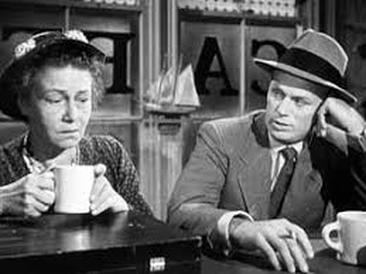 The most memorable scene in the film is when Joey  murders Moe in her apartment. That brilliant scene is the penultimate act of four acts that epitomizes the despair and loneliness, not only of Moe Williams, but for many others in this world of noir. It starts at the diner where she chastises Widmark for wanting to sell the film to the commies, then mothers him, telling him he should use his brain not his hands and to settle down with, "that muffin you grifted." The two interact easily, effortlessly and most importantly, naturally. It’s  as if they are not acting at all which is the best type of acting.

We then follow Moe as she hawks her ties on the way to her apartment. She walks past a row of people who lean forward on a fence at a construction site with their backs turned to the camera.  One lonely person stands near, but not too near, another lonely person until they form a line of lonely people who have nowhere to go and nothing to do on a summer’s evening than silently watch the construction of a new building. 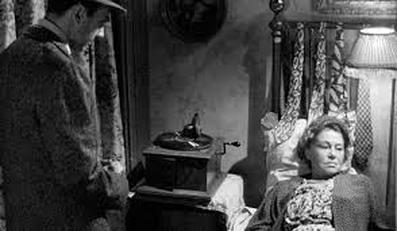 A good noir will have scenes that are etched indelibly in your mind and linger with you long after the film is over. It is hard to find a more touching one than this. The record player next to her is an antique that needs to be wound up before it can play.
​
The final acts ends with McCoy saving her from a burial in Potter’s Field.
​
Richard Widmark is in two of these three clips, and he doesn't get much dialogue. But he sure does a lot of acting. 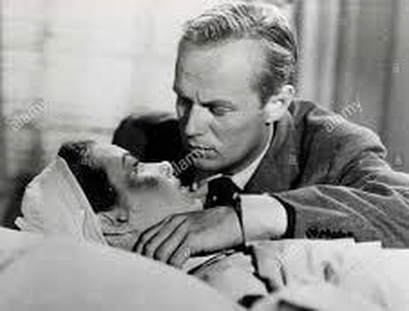 Pickup pushes the edge of two standbys of film noir.  It appears a prerequisite of any crime/mystery/thriller/detective film from the 30's to the 50's is to show some form of physical violence against a woman.  Usually a slap in the face suffices. But Pickup shows a more realistic scenario.

Prior to this next clip McCoy is set to meet Joey and sell the film. Candy knows Joey will then kill him. Candy knocks him out (returning a favor when he did the same to her) and brings the film to the police.  She tells them Skip sent her. She does all she can to put Skip in a good light. The police ask her to be a decoy and bring the film to Joey and they will arrest him. It's a common theme in filmdom for law enforcement agents to ask a private citizen to be the decoy, and risk their life to give them what they want on a silver platter.  It's usually to bring a murderer to justice, to rid the town of a corrupt judge. In Candy's case it's, "You do want to fight communism don't you?"  The people who send Candy to Joe,  are the same people, Fuller might tell us, that send young men to fight for this -ism and that-ism. All they ask is for every citizen to do all they can for their country, and then do more. She's told not to worry. They'll be across the street should anything go wrong.

Unknown to her is Skip has kept one frame of film as an insurance policy. Joey goes ballistic when he finds out it's missing, and demands to know McCoy's address. When she won't reveal it Joey starts beating on her. Her repeatedly slaps then throws her around the room and bounces her off one piece of furniture after another. Fuller heightens this beating by pulling the camera further back and we see get to see the beating, as spectators watching a one sided street fight and  not as peeping toms through a keyhole. The cops arrive only after she is beaten and shot.

This leads to another film noir trope given the Sam Fuller treatment. You'd need an abacus to count how many times someone has been pistol whipped and just as many times that person has woken up rubbing his head and complaining about a headache. In this case Joey pistol whips a cop, and in a more likely scenario, the officer is killed.
Skip sees her at the hospital. This shift in the lives of McCoy and Candy are neatly framed in this next clip.

When she expresses affection for him he is skeptical, "And I'd rather have you talk without a twist,"  he says. He is taken aback when she says she got beat because she wouldn't give Joey his address. There is a brief second where McCoy fully comprehends Candy's love for him. Moe told him to use his brains and not his hands. Before he can do that he uses his hands one more time and and beats up Joey at a subway station.

Ritter gets much deserved credit for her acting;, Peters, and especially Widmark should as well. 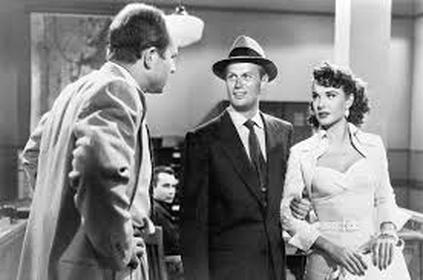 There is a very happy ending. It's something I don't particulary like but in a film as this you gotta give them a break. McCoy and Candy get to say goodbye to Lt. Tiger.(Murvyn Vye) McCoy's had his entire record expunged, and they are going to get married.

Pickup On South Street, is an excellent movie. Like other films we are brought into a world of noir, there is a nice sense of redemption for both Candy and McCoy. It's not from seeing the righteousness of 'waving the flag,' but rather in believing and trusting in someone, when their lives have been predicated in doing the opposite.

​Samuel Fuller leaves something of himself in every film, and for 90 minutes lets us see a world he is well familiar with.