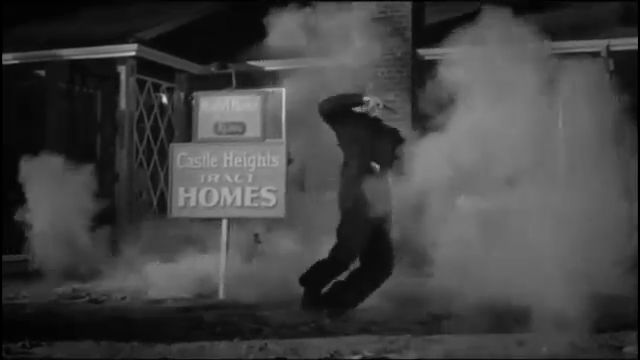 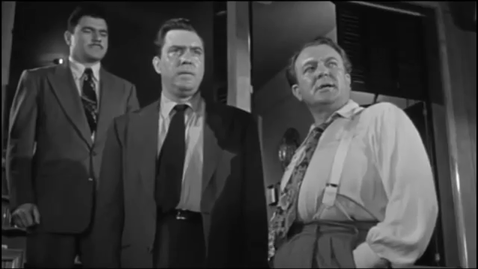 Questionable police procedures have always been a part of crime films, and usually have been glossed over with a wink and a nod. One example are those burning light bulb 'third degree,' interrogations that are as much a part of crime films as fedoras, wise-cracks and cigarettes. It was understood that while these things are not pleasant, they are often needed to fight crime.

In Otto Preminger’s, Fallen Angel, (1945)  Charles Bickford plays a former NYC policeman kicked off the force for brutality then moves to a smaller town and starts where he left off.   Five years later in, Where The Sidewalk Ends, Det. Mark Dixon (Dana Andrews) is continually reprimanded for numerous citizen complaints. His situation is exacerbated when he accidentally kills a man in a struggle and hides the body. The Big Heat, (1953) shows us  a police department rife with corruption from City Hall down to the cop on the beat.  In 1954 there were at least three top notch noirs where a good cop goes bad. Private Hell 36 and Pushover, show us two good cops led down the road to perdition by their lust for a woman.  The third of those films was, Shield For Murder.

Nolan's vision of the American dream is to buy his fiancée (Marla English) a house in the suburbs with a  modern kitchen. These are fairly innocuous bourgeois goals but are out of reach on his salary. He robs a bookie carrying $25,000 to give to his boss and and then Nolan murders him. The quest for the American dream is a major theme in the transition from 40s to 50s noirs.

In, Too Late For Tears, (1949), Janet Palmer (Liz Scott) rationalizes her criminality thus:  "It wasn't because we were poor, not hungry poor at least...it was worse, far worse, we were white collar poor, middle class poor…The people who can't quite keep up with the Jones' and die a little everyday because they can't."  Both Palmer and Nolan pervert the valid, well deserved pursuit of the American dream that was buttressed by a roaring post-war economy and the G.I. Bill. 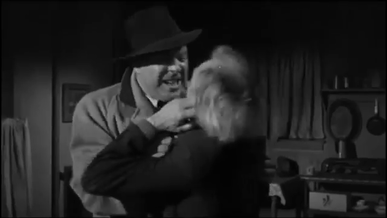 One would think that a cop with Nolan’s experience could not have come up with a better plan to get the money. He could have taken the runner for a ride, whack him, and dump his body. Instead he kills him on a city alley calls in the murder and hangs around while other police come to investigate.

​There is a lack of character development in this film which is not necessarily a bad thing for a B movie, however some background into Nolan’s past might have explained what appears to be an amateurish act of desperation.  It isn’t long before Nolan comes under suspicion and he quickly becomes a strong suspect.  Two private detectives hired by the ripped off crime boss come to the police department asking about the missing $25,000.  This news surprises no one and even Nolan's partner is suspicious.

But those are matters of triviality.  The plot is inconsequential. It's the old cop gone bad, and his good cop partner, who learns his idol has feet of clay and must turn him in. We have speeches that describe the temptations the cops have to face, the type of low lives they meet every day, and while true, we've seen it before. What we haven't seen is a remorseless degenerate cop who along with a series of violent scenes pushes the edge of the Hays Code envelope.

​Things get worse for Barney when the witness comes to the station.  Unable to speak he writes down what he saw the previous night. Nolan volunteers to visit the old man at his cheap tenement apartment.  Nolan accidentally kills him then pushes him down the stairs. The scene brings to mind Tommy Udo (Richard Widmark) pushing the wheelchair bound mother of the squealer down a flight of stairs. 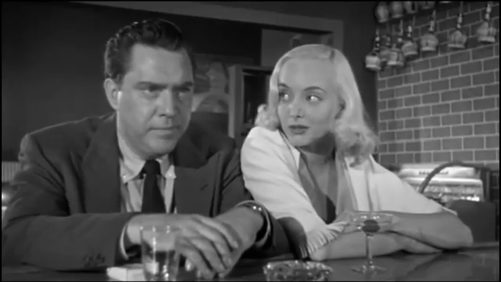 The supporting cast is good. John Agar is his partner, Marla English is his fiancée. Emile Meyer is newly appointed Captain Gunnarson who must contend with the head case he inherited and periodically lets the audience know that Nolan is an aberration among police. Claude Akins, one of the most popular actors in television, is effective as the private detective. Carolyn Jones has a memorable role as a hungry B girl.
​
After killing the old man Nolan stops for a few drinks at a spaghetti joint owned by Vito Scotti.  Jones plays a B girl as she did in, The Big Heat, where Lee Marvin burns her hand with a cigarette butt. She adds a soft touch to this testosterone fueled high octane male oriented gem of a movie. She has nearly all the dialogue in this long scene, and in my opinion does the best acting job in the film. She fails to get a date, but does manage a hearty dish of spaghetti and meat balls.  As she ravenously chows down on her meal, Nolan notices a bruise on her arm. When asked about it she shrugs it off as if it were no more than a mosquito bite. She,doesn't know, she says, someone did it, she says and continues with her meal. 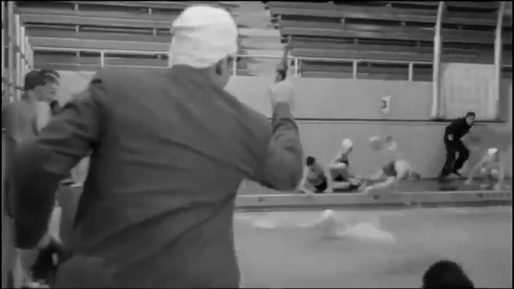 Nolan's was in a bad mood from the time he entered the restaurant, and didn't get any better when he learned the two private detectives had visited his fiance. So, when Fat Michaels (Claude Akins) and his buddy enter the restaurant, a fight quickly ensues. Nolan beats them both. He repeatedly pistol whips Fat Michaels about the head. Even by today’s standards it’s a disturbingly violent scene. Graphic overkill has for decades been a de riguer template for thousands of films and television shows and it might all might be traced to this scene, and the collection of scenes in, Shield For Murder.

The beat down in the restaurant would have been the ultimate in almost every movie, but there is more to come. The coup de grace of the film is the brilliant shootout between a fleeing Nolan and the pursuing, head heavily bandaged, Claude Akins, at the local high school’s pool. I haven’t seen such blatant disregard for the safety of innocent bystanders since Ward Bond was shooting at Jimmy Stewart down a crowded avenue in, It’s A Wonderful Life. 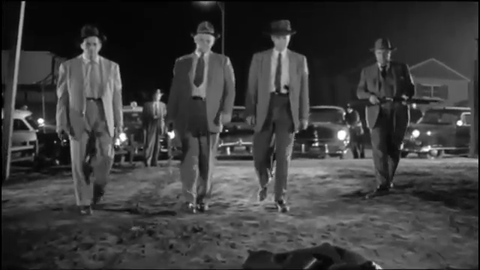 The movie started with Nolan murdering and robbing a bookie to have his own home in the suburbs and live the American dream. It ends with him in front of his dream house confronting his fellow policemen. Nolan wears a stolen police uniform, and gets riddled by a fusillade of bullets. There may have been attempts to infuse  social consciousness in this film but in the end it’s eighty-two minutes of pedal to the metal action.  For this movie to be done justice it should be seen on a big screen in a movie theater, or if there are still some around, a drive-in. It seems to me too big for even a large 60 incher.

​Shield For Murder might be the progenitor of films like Bad Lieutenant, To Live and Die in L.A. the television series The Shield, among others.  Shield For Murder, may have buried the last vestiges of the Hays Code with its numerous scenes of violence and depravity administered by the protagonist;  a police lieutenant; one of the good guys on the thin blue line.

Barney Nolan and His Cinematic Progeny 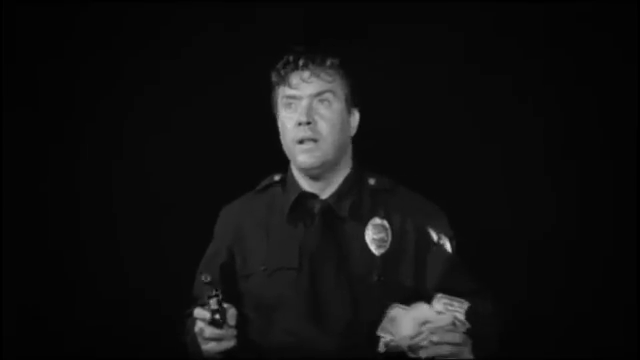