1960 Game 7-Where was Ford and who put that pebble there? 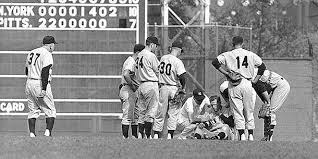 I was surfing youtube and came upon a show commemorating the 50th Anniversary of the Pirates 1960 World Championship. It was held in an auditorium in Pittsburgh with a lot of Pirate players from that team. Series MVP Bobby Richardson was the only Yankee. They replayed the final three innings of what many consider the greatest World Series game in baseball history. I watched the grainy black and white game and it was as if it happened yesterday.

I was in fifth grade. Robert Schroeder brought his transistor radio and was secretly filling us in on the game, until the teacher, who knew all along, gave him the official okay, and class done and we could listen until the bell rang and school out. I lived only a block away and was able to watch the last three innings. The Yankees three wins were by scores 16-1, 10-0, and 12-0. The Bucs victories were 6-4, 3-2, and 5-2.  Casey Stengel was fired after game seven. He cited his age as a reason and said he’d never make the mistake of turning 70 again. But, the entire series was mismanaged, and game seven was the final straw.

The biggest controversy was why he didn’t have Ford start game one. It would have meant he would have had enough rest for game seven. Art Ditmar started games one and four for a total of 1.2 innings.  Ford threw complete game shut outs in Games three and six with respective scores of 10-0 and 12-0. In both games the Yankees were ahead 10-0 going into the seventh, so why didn’t he take him out and save him for a possible seventh game?   Stengel had him warming up in game seven and had Ford not pitched 18 innings in two blow outs  he could have pitched an inning or two.

When the slow moving Dale Long pinch hit a single in the eighth Stengel kept him the game, when it called for a pinch runner.  Had Clemente not bobbled Mantle’s ground single he would have thrown out going to third. It was then Gil McDougald replaced Long.
Mazeroski’s shot broke many hearts, but the bad hop grounder that hit Tony Kubek in the throat on what would have been a sure DP was a punch to the gut. A few batters there would be Hal Smith’s three run homer, then the ninth saw Mantle evading a double play that allowed the Yanks to tie the game, and then-in the bottom of the ninth-Mazeroski’s shot.  It’s been almost sixty years, and it’s like it happened yesterday.

There were some interesting things. On a two strike pitch Hal Smith’s check swing easily crossed the plate and could have been called a strike. The legendary Roberto Clemente bobbled two ground singles. The first had no impact, but the second would have seen Long throw out at third. There were NO strike-outs in that game. There was a beautiful double play from Kubek to Richardson to Skowron that would be on ESPN all week long. Bobby Shantz pitched five scoring innings and if the ball doesn’t hit a rock more than likely would have thrown six scoreless innings.

It’s not sour grapes to say the Pirates got the breaks. The former Pirate players on the show said that game seven was symbolic of their entire season. Maybe a Pittsburgh win was meant to be. Who knows? I’m glad there were no replays, and although I missed the first six innings, I’m glad it was played in the day time for part of the mystique was sitting anxiously and nervously listening to Robert Schroeder giving us updates and then me flying to see the ending of the greatest WS game in baseball.
​
As for me…well it was a shock. I couldn’t believe it. I was a fan. A true fan. There is no crying baseball?   Not all the time. ​

Some Baseball Cards Can Tell A Story

ELMER VALO--1957 TOPPS
A baseball card  is merely a picture of player's face. Sometimes there is a story behind a card of a certain player, Roy Campanella or Herb Score for example. But seldom we do actually see a story on the card. Not so with the 1957 Elmer Valo card. This is a rare occasion when there is ia story in the card.

I think it was taken at Ebbetts Field. This was years before helmets were mandated and it appears he's wearing a liner in his cap. Behind him is a state of the art f1957 television camera. It's Channel 9, WOR-TV and it would later broadcast the Mets. You can see the cameraman over Valo's shoulder.

I'm curious about the guy a couple of rows up. He's got his feet on the railing, looks like he's dressed in a white shirt. He could be associated with the Phillies. Then again, he may have played hookie from work, or left early telling his secretary to hold his calls while he spends a beautiful summer's day watching a ballgame.

Yeah, that's it. He decided for this one day at least the heck with the rat race, time tables, conferences, and deadlines. I'm going to catch some rays and watch the Phils and Dodgers. Good for him. As for Elmer Valo? He played 20 years. had a lifetime batting average of .282 with 601 RBIs and 284 stolen bases.
​

There are many ballplayers for whom that quote is applicable, and none more so that Herb Score.  His rookie and sophomore seasons wth the Cleveland Indians rank as among the best of any pitcher in Major League Baseball.  In 1955 at the age of 22
he was 16-10 with an ERA of 2.85 and a league leading 245 strikeouts. It was a record for rookies until Dwight Gooden's 275 k's in 1984.

The next year he was 20-9, 2.53, led the league again with 265 strikouts as well as shut outs with five.  He was on course for another course unitl May 7, when Yankee Gil McDougald smashed a line drive that caught Score flush on the eye. He was hospitalized for three weeks and did not play the rest of the year.

He was never the same after that. From 38 wins in his first 68 starts he managed only 17 more in his final 57 games.  Contrary to popular  belief it was not due to poor vision. Score said him his pitching motion had altered a bit. He was already experiencing arm problems. There are conflicting reports about his arm. But, it does make sense there might have been a slight change in his motion.

No one will never know what career he would have had. A plaque in Cooperstown seemed certain.  When his playing days were over he went on to broadcast games for the Cleveland Indians for over 30 years. He had no regrets.

Dave Gettleman: What, him worry?
​I am a Giants fan and was stunned by their first pick. There was no reason to pick Jones at #6. The obvious choice was Josh Allen. Jones would have been there at #17 and probably would have been there in the 2nd round as well.  Lawrence was a good, safe choice. The question is how he will do without DE studs like Ferrell and Wilkinson flanking him? The Giants are hoping OSHANE XIMINES .will give them the outside rush. The surprise may be fifth round pick Darius Slayton from Auburn. He has tremendous speed and long with Sterling Shephard, will give Manning, should he have the time, two deep threats.

I don’t understand the love fest for Kyler Murray nor his coach Kliff Kingsbury. Kingsbury had one winning season in his sixyears at Texas Tech and that was his first. You can give him credit for being consistent, as he was 3-6 in Big 12 play his last three years with the Red Raiders.  Kingsbury is hoping Murray can follow Mayfield and Mahomes as fellow Big 12 QBs who made an impact. Both those two QBs were multiple year starters. Murray started only his freshman year. He played behind a great OL. He was rattled, and was ineffective against Alabama in the playoff game. The Cards need help everywhere and I don’t see him as an immediate impact player.

Guess who had a good draft? The New England Patriots did it again, and Tom Brady is happy. They picked WR N’Keal Harry, who gives Brady a bona fide deep threat. Damien Harris in the 3rd round was a steal. He will give them a great 1-2 combo in the backfield much like the Saints had with Ingram and Kamara. When he was given the time there was no more accurate QB in college football than Auburn’s Jarrett Stidham, IF given the time. Should he learn to adjust to the speed of the NFL he will a good one.   The Patriots got stronger this year.

The Oakland Raiders may have had the best draft of them all. They had three first round picks and did well with each of them. Josh Jacobs from Alabama will be as effective as Barkley was for the Giants., Clelin Ferrell will make an immediate impact as an edge rusher. GM  Maycock wanted him enough to pick him over Josh Allen and Brian Burns. Josh Abrams is a safety from Mississippi State and will bring instant help to their secondary.