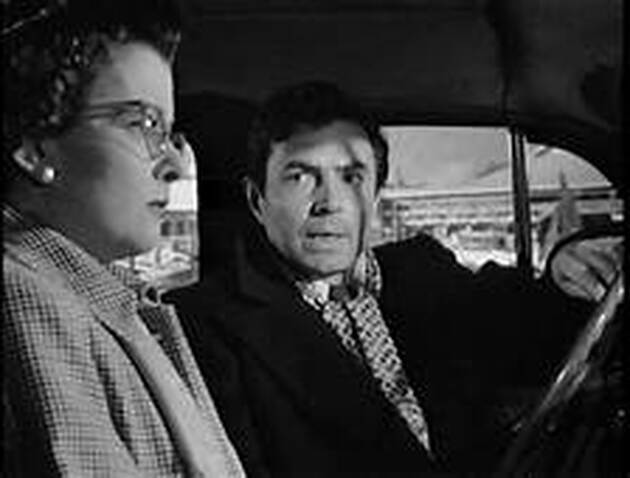 "You don’t know how a family surrounds you at times.”
​"Do you ever get away from your family?"
"No." 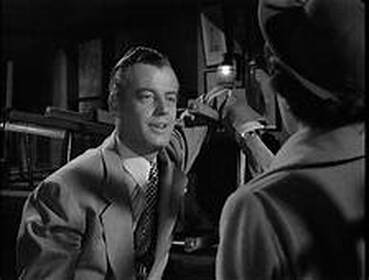 The Reckless Moment is an interesting take on the changing and conflicting roles of women in post-war America as well as class bias.
​
Lucia Harper (Joan Bennett) runs her home with a mixture of a mother’s love and the strictness of  a benign martinet.  Her children call her Mother and she calls her Father, who shares a room with her son, Father. There is no Ma, Pa, Mom or Dad, but neither is there a Mater or Pater.  It is a proper upper middle-class family.
​
Her husband is with his company rebuilding Germany under the Marshall Plan. Lucia has a teenage son and a teen-age daughter. The boy is well behaved but forgets to wear a shirt while working on the jalopy and Lucia is quick to remind him. Her daughter, Bea (Geraldine Brooks) is in art school. Her father wanted her to go to college. He was concerned about the type of people she would meet. His concern is not along socio-economic differences, but rather cultural and philosophical lines. Lucia took her side. It was a decision she would soon regret.

Bea becomes infatuated with one of those people her father warned her about. Ted Darby (Shepperd Strudwick) is an older art dealer with a gambling problem. They have written letters where she expesses her love and admiration for him. He wants to make their relationship sexual and Bea is seriously considering it. Lucia discovers the letters and makes the hour long trip to Los Angeles to confront him at the hotel where he lives. She orders him to stop seeing her. Darby suggests they ask Bea. Lucia offers to buy him out; he agrees, she reneges and says Bea will dump him when she tells her about her so-called great love. She thinks she has saved her daughter from Darby, and the family from shame. 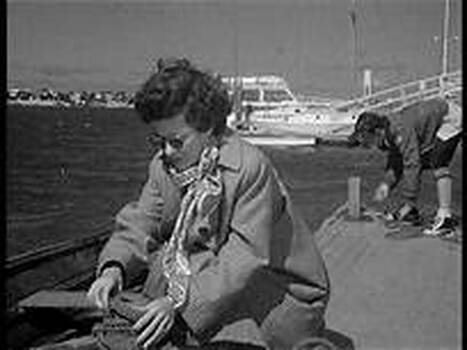 Darby tells Bea about the deal but says he has no intention of leaving her. She is upset and fends off his advances then whacks him over the head with a heavy flash light. He breaks through a fence railing and lands on a spiked anchor and is killed.

Lucia discovers Darby the next morning.  What follows is a great scene that captures Lucia's determination, will, and duty to her family. She drags his heavy body into the boat, easily starts the motor, expertly drives it on the bay, drops the anchor in one place and the body further down the shoreline. The physical effort, along with her calm efficiency is praiseworthy. A man could not have done it any better. But her work is not done; a woman’s work is never done.

Her son is at the dock when she returns. He tells her she never should have taken the boat for it needed a spark plug.  Lucia tells him to roll down his pants cuffs and button his jacket. She took care of Bea’s extreme situation yet never shirks her duty to address the mundane details of family life that constitute a Mother’s duties. James Mason, the film’s gentlemanly blackmailer will later suggest she’s been programmed. Lucia will not disagree.
​
Darby is gone, but not Bea’s letters. They were taken by Nagle (Roy Roberts) a bookie to whom Darby owed five thousand dollars.  He sends his assistant Donnelly to blackmail her for the return of the letters. Donnelly (James Mason) is every woman's ideal blackmailer. He is refined, articulate, soft-spoken, erudite, and concerned about her smoking habit. He doesn’t arrange a meeting at some shady place instead he drives up to her home and acts like a long lost friend.

Mason says he’s working for a Nagle, who is not as nice and gentlemanly as he. She thinks he’s lying.  Hoodlums, after all, don’t look, act or speak like he does. Regardless of what she thinks, Donnelly is serious and wants the money, and will continue to see her until she pays. 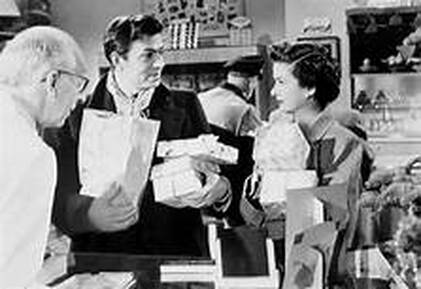 ​​They meet for the next couple of days and he even accompanies her on her daily chores. When they stop at drug store, Donnelly, who is concerned about her chain smoking, buys her cigarette holders to cut down on the nicotine and throws an aside to the clerk that cigarettes should not be sold.  Most movies have a defining scene that binds the characters to each other, and in many cases that scene takes place in a car. The Postman Always Rings Twice, Double Indemnity, and Gun Crazy are only three examples. In this atypical fringe-noir it takes place in Donnelly’s car as it’s ferried over the lake. The trip is serene and the conversation is polite. We get a good insight into both Lucia and Donnelly.
​
Donnelly has fallen in love with Lucia and she has brought it about not by flirtation or connivance but rather through her determination, and the lengths she’ll go for her kids. Bea is lucky to have a Mother like her he tells her. She responds, ​“Everyone has a Mother like me. Even you I suppose.”  That statement  exposes her cluelessness to a world outside her social milieu and the words, 'even you,' is not much different than, 'those people,' or 'you people.' We know everyone doesn't have a mother like Lucia, and she's old enough to know better. Lucia’s been brought up to believe that sacrifice and total devotion to children is not atypical but expected and natural.  For all she knows, it's been programmed into the genetic make-up of a woman.

James Mason has the gift that few actors do of making everything look so easy. Many actors have said the key to acting is in the facial expressions, and especially that of the eyes. James Mason is among the masters of that art.  He doesn’t respond but there is a very slight look of hurt on his face. If you blink you will miss it. He tells her she’s a prisoner in her home. She disagrees. “You ever get away from your family?” he asks her, and she tersely responds, “No 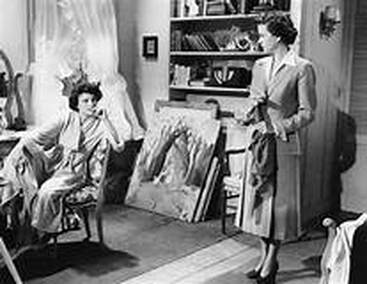 ​This is the best of Max Ophuls’ three American films. I don’t think there’s any director more attuned to detail than Ophuls. Any film he directed is worth watching. He does more than fill a street scene with characters strolling down the street or milling through a rail station. He will have people come out of nowhere and for a moment disrupt the continuity of a scene, and once the interloper is gone, the scene continues. It’s similar to talking to someone whose phone rings. The conversation will briefly stop until the caller is advised to call later or not at all, and when that is done the conversation begins again as if the phone never rang.

This film does not give Ophuls the opportunity to display his brilliance for opulent wide sweeping shots of grand homes, concert halls, and his particular fascination with balconies. Yet, even in Lucia's upper middle class home he fills the scene with enough detail and minutiae to give it an air of affluence. He shows his skill for urban street scenes when Lucia visits the wrong side of the street to borrow money to give to Nagle. The shots inside the loan office and pawn shop are excellent. It is standard for the cinematography in any of his films to be outstanding.

On a side note, Geraldine Brooks was incredible in her abbreviated screen time.  When she learns she has found out about her Mom's involvement with Darby she tells her:  "Mother you are terribly old fashioned. You couldn't possibly understand a man like Ted."  The next scene Bea sits dressed in her robe, one leg rests on a chair. Her legs are slightly apart and she consciously moves her leg side to side, occasionally bites her nails and smiles all the time. If she's looking for a reaction from her Mom she doesn't get it. Bea dismisses her mother’s concerns by saying:  “When you’re seventeen today you know what the score is, you’re not a child anymore.”  ​ 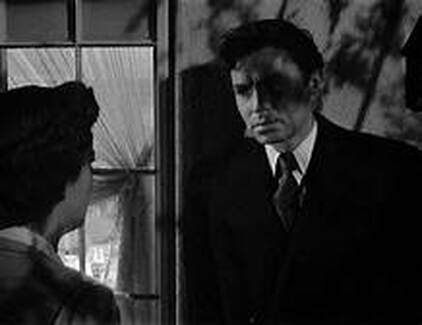 ​Nagle can’t wait any longer. He knows Donnelly is too personally involved and he pays Lucia a visit. Donnelly intervenes and in the ensuing fight is wounded but kills Nagle. Donnelly races away in the car but crashes. Lucia has followed him and his final sentiments are not much different than, “It is a far, far better thing that I do, than I have ever done; it is a far, far better rest that  … I have ever known.”  He begs her to leave and he will take care of everthing. We later learn he confessed to the police that he killed Darby, (in his dying breath no less). Donnelly has redeemed his life ill-spent, a life which he said he never did anything right, and has done it for a woman, who in his eyes, is doing everything right.

In a film that is slow paced in terms of physical action, Lucia is on the go from beginning to end. She is like a juggler with several balls in the air. I found it interesting there are several times she fusses over her missing shopping list. I thought it might be something that would later tie Lucia to Darby's death. The list is finally found. It's only the family shopping list. Its relevancy perhaps it is an integral cog in maintaining the smooth running of the home. It's another example of the juxtaposition of the many roles Lucia must manage.

James Mason puts in his typically understated, calm, and effortlessly great performance. Joan Bennett, who was such a louse in, Scarlet Street, is great as Lucia, who is always in control of her emotions and presents an aura of bourgeoisie oblige. Geraldine Brooks, as noted, was wonderful. A good movie also needs strong support from the minor supporting actors and long time veterans, Roy Roberts and Shepperd Strudwick are vey good. 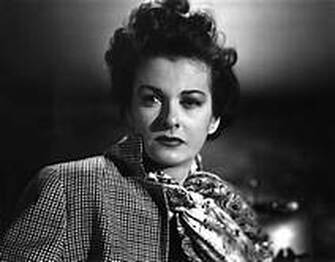 Lucia has stepped up to plate and taken command.  We can applaud her for that. She says the entire affair would have been better handled by her husband, Tom. That presumption is what society at that time expects to hear from a wife, and while it's the case in this film, Lucia's efforts tell us that in the future it won't be necessarily so. She tells Bea she supported  her choice to go art school because: “I mistakenly thought you were right thinking enough to be discriminating enough about the friends you chose. Well, he (Tom) was right and I was wrong.”  And later; “My way of doing things made everything wrong.

At the end of the film, with Donnelly’s body still warm, she gets a call from Tom. Her tears dry up, she says, “Everything is fine except we misse you terribly.”  It is a cry for a return to the way they were before the war. But that won’t happen; not for her, for Tom, her son, Bea, or for the rest of the country. ​ 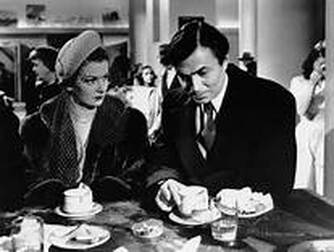 The Reckless Moment is  a film one can see repeatedly and discover something new each time. It is a wonderfully acted and masterfully directed movie.