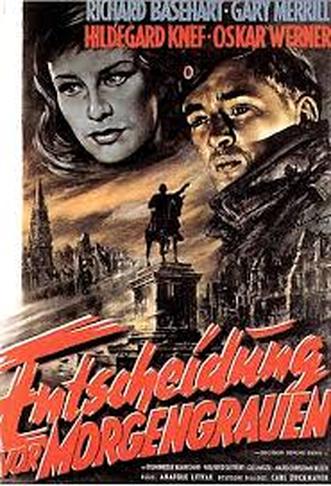 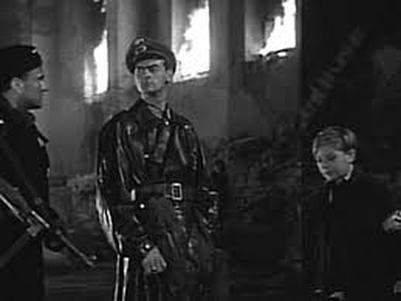 Filmed in Germany in 1951 with a predominately German cast, Decision Before Dawn is one of the finest movies about WW2.  There's a documentary feel to it and the use of real Wehrmacht uniforms and weaponry make it a must see for those who insist on realism in their films.

The movie takes place a few days before the Ludendorf Bridge over Remagen was captured in March of 1945.  Army intelligence has recruited two German P.O.W.s to use as spies. Their mission is to co-ordinate the surrender of a German infantry division. They are: an opportunistic, former small time criminal and street ruffian with the code name, ‘Tiger’ (Hans Christian Blech) and a young idealistic medic referred to as, ‘Happy’ (Oskar Werner) who volunteers  after his friend was murdered by other P.O.W.s for expressing anti-Nazi sentiments. They will be accompanied by Lt. Rennick. (Richard Basehart).

​ After parachuting into Germany, Happy travels through the devastated country. The streets are rubble strewn with collapsed bridges, and burned out buildings.  The civilians know Germany has lost the war and accept this inevitability with a warranted fatalism, death, starvation and misery.  Later in the film there is an excellent scene where Happy eludes capture when he hides in a bombed out opera theater.  The scene epitomizes the devastation more than any in this film, and perhaps any film about the war.

Happy meets an SS Special Courier Scholtz, (Wilfried Seyferth) on a train.  He is a boorish man who has seen little, if any, time on the front and has profited from those who have.  In their initial encounter Happy makes his first mistake when he shows him the large roll of cash he has. Scholtz says he has gold to barter for some of the cash.  He takes out a small bag where among the items is a big, beautiful wedding ring, whose owner, he states, had been married for 25 years.  It is obvious the ring and the other items he has were taken from holocaust victims.

At a local soldatenheim (a pub for soldiers) Happy rejects the advance of Hilda, a prostitute (Hildegard Knef).  It is while having dinner he makes his second mistake.  Scholtz regales about being in Paris in 1941 and asks Happy if he has ever been to France.  He says only Alsace.  Scholtz explodes in anger. He tells him no true German would consider Alsace part of France, it’s as German as the Rhineland and the Saar.  Happy leaves for his room and Hilda later joins him.  Once again he turns her away and says he feels sorry for what she has become.  She is angry and tells him her story: Her fiancé was killed in Norway, and left her with an unborn child and she was forced to fend for herself and for her child. Then in the Summer of 1942 there was an Italian Major who wanted to marry her.  She lost her child during a bombing raid, and it was at that point she lost all hope.

The year 1942 is not without consequence for the Third Reich. For most of that year Germany was flush with military success. But in October they suffered crushing defeats at El Alamein and Stalingrad.  For Hilda, and the Germans, the Spring of 1942 was the last good season they would have in the war.

Hilda’s story is a familiar one and can literally be used as a template for tens of thousands.  The next morning she tells Happy she was sent to her room by Scholtz, and for him to be careful as he is being watched by the Gestapo.

Later in the film Happy shoots the Gestapo agent who had been tipped by Scholtz and travels to Mannheim to hook up with Tiger and Lt. Rennick.  One night, after a bombing raid he stops a woman to ask for directions.  She is terrified and pleads with him that she is out only because she had to get medicine for her son and begs not to be arrested.  He gives her medicine and assures her he only wants directions.  She tells him then leaves to care for her son.  It is in a way disheartening to know that every extra in the movie, every actor who lived in Germany during the war has a similar story. The same can be said of course for all of Europe. What differentiates this film from many movies about the war is it tries to show a sympathetic and human side to the German people. Decision Before Dawn, was directed by Anatole Litvak, who left Russia for Berlin when the Communists took over, and left Berlin for America when Hitler came to power.  He can truly attest to the brutality of totalitarianism.
​
As previously noted many of  the cast lived in Germany during the war and Blech (Tiger) served on The Eastern Front for two years.  Wilfried Seyferth is perfect as the true Nazi. His non threatening physical appearance and seemingly benign demeanor are misleading, for he is a true believer.  It is his ilk that put the Nazis in power, kept them in power and made the Nazi regime run smoothly.  Alone, he is an inconsequential cog, but when combined with a million other inconsequential cogs he is as much a monster as other non-descript little men who rose to power along with Hitler as Himmler and Goebbels.

The movie asks for understanding, hope, reconciliation, a path from blind obedience to ideology. It will not be easy. It is only six years after the end of the war, and it is Scholtz who reminds everyone exactly who started the war.  Just prior to Happy’s miscue about the Alsace, Scholtz tells them they should enjoy the meal for who knows they might not enjoy another one and adds; “But if we go we’ve had a good time haven’t we? We’ve given the world 12 years it’ll never forget. No matter what they do, they will never get us out of their system.”  And as Kurt Vonnegut P.O.W. survivor of the Dresden fire-bombing would later write:  “And so it goes