NIGHT AND THE CITY 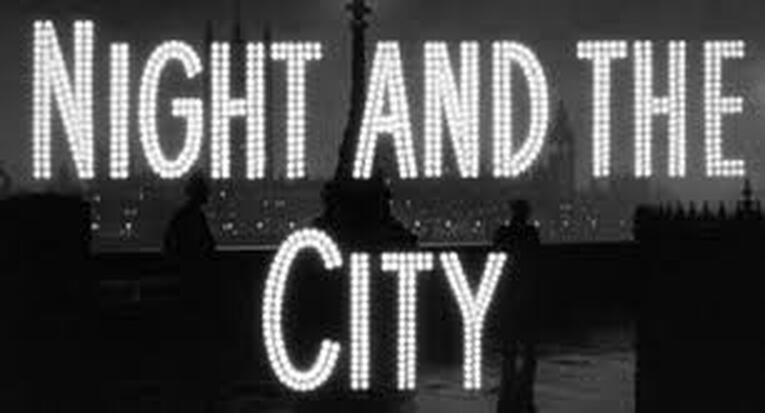 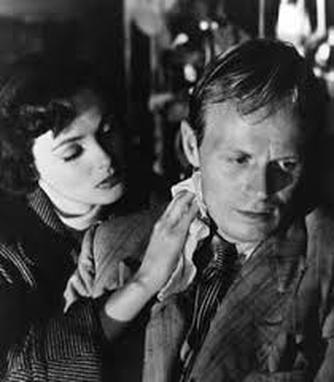 Night and The City is as perfect a film-noir as a film can be. One of the characteristics of film-noir is no happy endings and that's true for the minor players as it is for Harry Fabian, played by Richard Widmark. Fabian is a club tout; his job is to steer tourists to his employers nightspot, The Silver Fox,  which earns him a commission. Fabian has dreams of grandeur which invariably turns into a nightmare, for the person whom he tricked , as it does for himself.  He's a little man whose goals are to be a big-shot, and have the players and the big timers know his name.

His newest get rich scheme is to control the wrestling market in London. This is not the wrestling we know, but rather Olympic style. He enlists the services of retired champion Gregorious. What's a film-noir without a double-cross?  In Night and The City  there are several.  His former lover, (Googie Withers) now married to the owner of the club takes money from her husband (Francis L. Sullivan) for his venture. Fabian in return will use his 'contacts to get a business license for her own club which will allow her to leave her husband.  But in Harry's world, what's an ex-lover for if not to double-cross? Which is what Harry does, by getting her a forged license.

The fly in the ointment is Gregorious' son, Kristo (Herbet Lom)  He controls London wrestling and wants his Dad to have nothing to do with Fabian. Gregorious (Stanislaus Zbyszko) on the other hand loathes Kristo's  'fake wrestling' and with his other son joins Fabian.  Fabian goads Gregorius's son to get into a nightclub brawl with Kristo's number one attraction, The Strangler, played by Mike Mazurki.  But, Fabian's got the Midas touch in reverse: everything he touches turns to mud. A drunken Strangler and his agent meet at Fabian's club. Gregorius' son hurts his hand. Fabian sees an opportunity to get Gregorious as his main attraction and pull a fast one over Kristo. Gregorious wrestles the Strangler and is victorious but suffers a heart attack and dies.  Kristo, puts a bounty on Fabian.

Richard Widmark made his film debut as Tommy Udo in Kiss of Death, and starred in noirs Roadhouse, and Pick-up On South Street. In my opinion it's literally a toss-up as to whether this or Pickup...is his best performance.  As Harry Fabian he does a fantastic job; switching, in a second from a sniveling, scared two bit hustler, to a braggadocios, swaggering monument of entrepreneurial skill, which he is not.

The film also stars Gene Tierney as Fabian's girl friend, Mary Bristol, who sings at the club.  Ms. Tierney had been suffering from depression, and Darryl Zanuck recommended the role hoping it would help her situation. Her role is limited and despite her off screen problems there is no denying her beauty and class. The viewer wonders what she sees in Harry.

A big plus for the film, in fact a lot of the film’s popularity and high ranking among noir films, can be attributed to Silver Fox owner  Phil Nosseross (Francis L. Sullivan), and his 'trophy' wife, Helen (Googie Withers). She has stolen money from the club to give Harry the money to buy her a license she needs for her new club. When he delivers the license, she leaves Nosseross. The license is discovered to be bogus, and she has to return to the Silver Fox and plead to be taken back. Her calm, yet viperous nature plays well in contrast to the bolstering, braggadocios Harry Fabian. The story of Nosseross and Helen in itself could make a worthy film noir.

The last scenes copy the beginning of the film where Fabian is chased by one man to whom he owes money, and faces at worse a beating. This time however he is chased not only by Kristos' men but the entire sub-culture to which he belongs, eager to collect the bounty placed on him.  Fabian makes an attempt at redemption which is as little thought out, and fruitful, as his schemes for riches and fame.  There is only person who benefits from the treachery of both Fabian and Helen, and that is the cleaning lady at the Silver Fox. Nosseross made her the beneficiary when he changed his will before committing suicide.
​
One of the most visible trade marks of film-noir is the use of darkness and shadows. The entirety of this beautifully photographed film appears to be shot early evening, in dusk, early dawn, without any semblance of sun or brightness. Instead of London's Big Ben, St.Paul's Cathedral or the House of Parliament, Director Jules Dassin gives us the Thames riverfront, and the denizens of the underworld. I love the use of on location scenery. It's like having another star actor in the film.
​
There is a sense of claustrophobia that permeates the entire film. Even when on the run, racing down the riverfront, Harry is confined by the enclosure of the river banks. This is a film that one can just lay back and enjoy how beautiful black and white can be.

This is a great and is among my top ten of noirs.  There are no happy endings, no happy, smiling people. Night and The City  is, as stated before, as close to perfect a film-noir can be.