IT!  THE TERROR FROM BEYOND SPACE 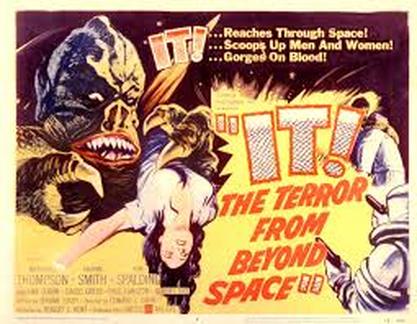 This is my review for the  ‘Outer Space on Film’ Blogathon being run by Debra  at Moon Over MIami. 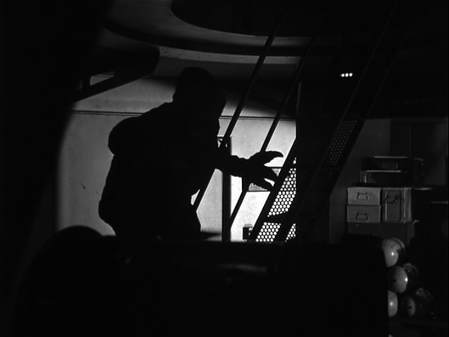 It! The Terror From Beyond Space, is a sixty nine minute gem that along with, Them!, The Thing, Invasion of the Body Snatchers, Invaders From Mars, and The Day The Earth Stood Still stands out as a classic of  1950’s science fiction movies.
​
It! takes place on Mars in 1973. A rescue mission is sent to bring Col. Carruthers (Marshall Thompson) back to Earth. He is the only survivor of the initial flight to Mars and is to stand trial for the murders of his crew. We quickly learn Marshall Thompson didn’t kill the crew, rather It!, the terror from beyond space murdered the crew. Within a few minutes of the film’s start the creature boards the spaceship through an  open airlock. We know from his scaly feet, scaly three fingered hand and his heavy breathing he’s big, ugly and scary, and once the rocket ship takes off the crew is trapped. 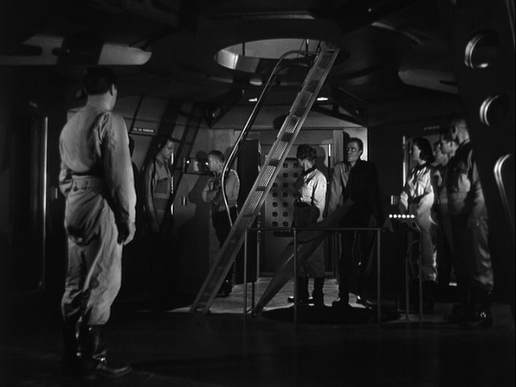 It! has often been cited as the forerunner to Alien, and there are similarities. But, there are also similarities to The Thing, so I don’t take too much stock in seeing Alien as a modern day version of It! In my opinion the film invokes the gothic theme of having an intruder hiding inside the home of a helpless woman. Their situation also differs from the usual intruder in the house, in that there are no doors for the quarry to escape or for help to enter.
​
It! is a departure from giant leeches, crabs, spiders, ants and slugs. There is more to It! than meets the naïve, gullible, eye of an eight year old or the  jaundiced, cynical and perhaps condescending eye of an adult. It! is a film many of today’s seven year and eight year olds would enjoy. In this review I will try to understand why this movie stood out from so many other low budget B movies of that era. 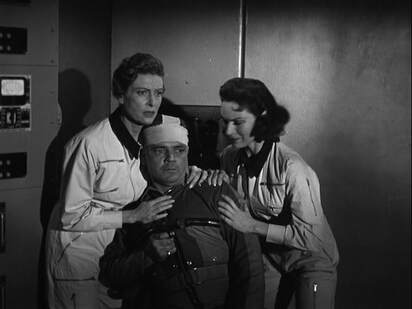 Director Ed Cahn directed an average of eight films a year during the fifties and sixties, and knew what to do with a small budget and short running time. Cahn, as the saying goes, could make lemonade when given lemons. One effect of a paucity of funds is to use a minimum of stage sets. In this film the sets that represent the different levels of the spacecraft seem no larger than a living room. This sense of claustrophobia makes it appear as if the audience, as well as the crew, is trapped. And when It! climbs from one level to the next it’s not so much as an intruder pursing the victim from room to room but rather from closet to closet.
​
It was smart to place the film close to the present. A film set far in the distant future would have necessitated exotic weaponry and the director’s visual perception of the future which more likely would have resulted in cheesy, rather than futuristic looking sets.  It would also have placed the movie in comparison, and competition, with an already crowded field of extra-terrestrial ‘futuristic’ movies. With the action taking place a scant fifteen years from the present It! has a contemporary feel that propels the young viewing audience into the action. 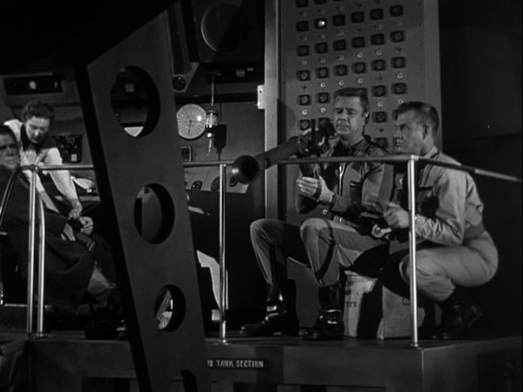 It would not have broken the bank for the studio to conjure up weapons of the future. They could have procured laser guns from another space show, or configured a rifle into some sort of destabilizing electro-magnetic atomizer. But to keep with the contemporary feel of the movie, the crew fights It! with hand grenades, smoke grenades, an acetylene torch, the trusty Model 1911 government issued pistol, and a bazooka! The choice of ‘modern day’ weaponry for this film is more effective than some weapon of the future. The humanoid features of It!  and the inability of familiar weapons to kill this two legged monster resonates more to an eight year old than would a failure of futuristic weapons. The monster, the plot, the weapons are all purposely low tech, and it works wonderfully with the targeted audience.
​
When you’re filming on the cheap, time is money. And little time is spent explaining or developing personal relationships. Screenwriter Jerome Bixby handles the interpersonal relationships succinctly. He addresses the male bonding aspect by including brothers as two of the crew members. When Gino is killed brother Bob becomes hell bent on revenge, as we’re used to seeing in Westerns and War films. There is a smattering of a love interest, and smattering is being generous, between the stoic Marshall Thompson and Shirley Patterson. There is no threat of either a female rival for Patterson or a male rival for Thompson; distractions after all would take time. It would not seem right to have only one woman alone with seven men. Cahn handles that by having veteran actors Ann Doran and Dabs Greer play a husband and wife doctor team. 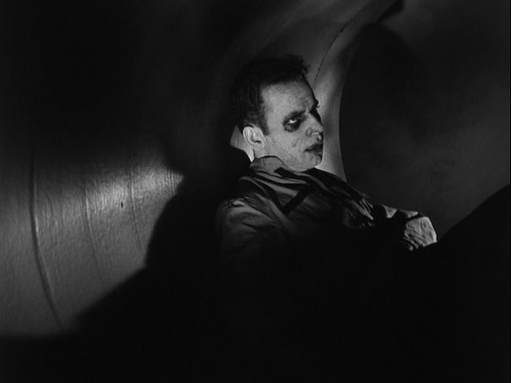 Gino Finelli, Bob's brother. His fate is what awaits the others if they don't destroy It!.
​B movie directors had to contend with a lack of a lot of things but securing talented, experienced actors was not one of them. The aforementioned Greer and Doran had over 600 film credits between them. Ms.Doran played James Dean’s mother in Rebel Without A Cause, and among her many screen credits are, Pride of The Marines with John Garfield and Pitfall.  Richard Benedict (Bob Finelli, brother of Gino) appeared in the classic, A Walk In The Sun, and was effectively poignant as entrapped miner in Ace In The Hole. The man in the It! suit was long time stunt man Ray Corrigan. 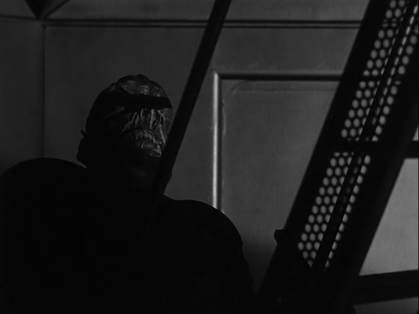 The script by Jerome Bixby (It’s A Good Life) is crisp, direct and adds to the screen’s quick pace. He gives each of the talented ensemble ample opportunity lines to ply their trade.  Yet, for all of the kudos I have given the movie, the fact remains It! is about a man in a rubber suit threatening people. How then could It! have been so scary? In my opinion it is because of the cinematography.


​
The film is resplendently shot in darkness and shadow, just as many film noirs of the 40’s. We hardly see It! in full light.  He is bathed in shadows and darkness. We see his silhouetted shadow beating to death a crew member, or carrying a crew member away where It! will drain his blood at his leisure. When we see It! in full light the monster is exposed as being something not so scary. Rather than a Martian blood draining monster, we are reminded of its terrestrial cousin, the Creature from The Creature from the Black Lagoon. This is never more evident than when we see the monster held at bay by an acetylene torch. The monster in darkness heightens the fear factor, and disguises the fact this dastardly creature is easily identifiable as a man in a rubber suit. Below are a few examples. 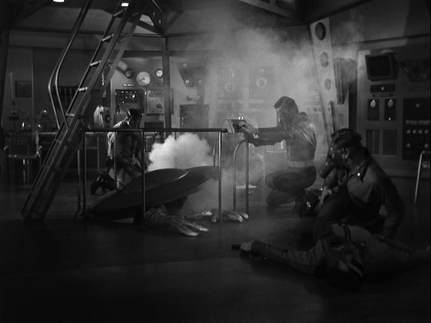 Nowhere to run to, nowhere to hide. Kill It! or DIE!
When I first saw the movie, It! was frightening and scary. That is not the case now of course.   It! should not be considered as camp, or relegated to ridicule.  It! and similar types of films were a big reason why on  Saturday afternoons we sat transfixed in a darkened theater and watched the horrors of ants, leeches, spiders, slugs, haunted houses, and in the case of It!, a scary Martian monster chasing crew members from one level of a spaceship to the next.
​
It! The Terror From Beyond Space is a classic of its genre.