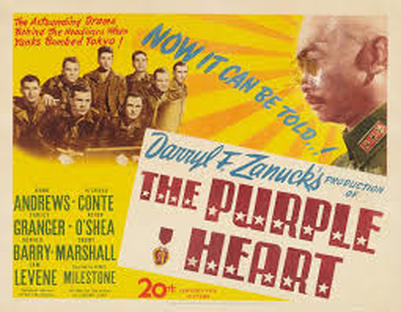 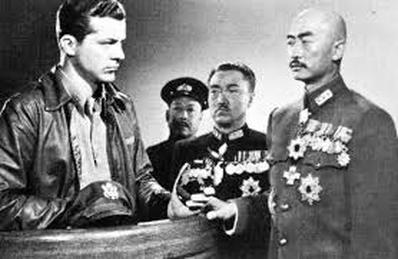 This my contribution to the blogathon, Order in the Court.  Check out: CineMaven's ESSAYS from the COUCH,  and Second Sight Cinema.


​
On April 18th 1942,  16 B-25s took off from the carrier USS Hornet and bombed Tokyo. The Doolittle Raid inflicted minimal damage but its effect on morale was tremendous. For the first time since the attack on Pearl Harbor the United States was able to strike a blow against Imperial Japan. Most the 16 crews were forced to land in China and brought to safety by the Chinese.  One crew was captured by the Japanese, brought to trial in Japan under the specious claim of bombing civilian targets and indiscriminately killing civilians. The Purple Heart, directed by Lewis Milestone and starring Dana Andrews, Richard Loo, Richard Conte, Sam Levene and Farley Granger, is Hollywood's take on that event.​

War films of this period are often dismissed, especially when viewed through contemporary criticism, as racist, jingoistic, propagandist; all done with the advantage of fifty years of hindsight. Make no mistake about it, the The Purple Heart is guilty to some degree of containing some of the above.  But the viewer would be wrong to totally dismiss it as pure propaganda.  The Purple Heart, it can be said, takes less artistic license, than Bridge Over The River Kwai, Bonnie and Clyde, and JFK to name only three.

The crux of the film is not so much the trial, but rather the attempt, and failure, of the Japanese government to discover the origin of the planes. This is a point of contention between the Japanese Army and Navy. Each has a vested interest in the discovery. If the planes were carrier based the Navy would lose honor and destroy their assertion that Japan is impregnable. If land based, either from China or Russia, then either of those countries could be be used as staging points for an invasion of the Japanese mainland and the Army had failed in their mission.

The burden of getting that information is assigned to General Mitsubi (Richard Loo). The General has correctly assumed the planes were carrier based and has pledged with his life to get an admission from the prisoners that would verify his assertion. His counterpart Admiral Yamagichi (Keye Chang) claims it is technically impossible to have bombers take off from a carrier. His assertion of the impossibility of such an operation reinforces the heroism of the American airmen and the ability of the nation to do the seemingly impossible.

The film alternates between court room scenes, where the deviousness of the Japanese along with their axis partners are contested by the quiet patriotism of the fliers, and the jail cell where the bomber crew wait to see who will be chosen for torture. The viewer is left to their imagination and knowledge buttressed by films, photos, and reports of the Japanese invasion of China, the Bataan Death March, to draw their own conclusions and paint their own picture.

There is a flashback to the crew's parachuting from their doomed bomber in China and their subsequent betrayal by a Chinese provincial governor. In a film where the members reflect upon their pre-war life and their dreams, usually with typical Hollywood bombast, their is a touching scene, done in silence, where Captain Ross (Dana Andrews) and his wife, watch their son tender to a new born colt.

Unlike previous films The Purple Heart shows the American people the faces, the ideology and  insight into the enemy. The only exposure Americans had to the Japanese enemy was to see them as faceless anonymous soldiers who died by the score. They were not presented as human beings but rather as targets.  We saw none of this, until The Purple Heart.

In an excellent scene General Mitsubi in an effort to coerce Captain Ross  gives insight into the Japanese code of fighting and details correctly the bravery and willingness of the Japanese soldier to undergo tremendous hardships for their Emperor. Mitsubi's message is clear: the road to Tokyo will be costly.
​
Although first seen decades ago, I still vividly remembered many of the scenes of the movie. One of the most dramatic is when the presiding judge stops the proceedings to announce that Corregidor has fallen. The courtroom erupts in celebration. The ‘impartial’ foreign observers break out in cheers and there are hugs galore. The Navy and Army officers unsheathe their swords and perform a samurai sword duel/dance . The camera cuts to the frightened faces of the bomber crew for they all know the trial can end at that moment and proceed to the execution phase.

This gives General Mitsubi, a bargaining chip in his battle with Captain Ross.  There is no hope for them, he tells him. MacArthur abandoned his troops and chose, as he describes it, the prudent course to run. Why then should they sacrifice their lives, if a General won't? Captain Ross replies that MacArthur had his orders and he has his, and that the Japanese have not seen the last of MacArthur.

Since this is a show-trial and the outcome pre-determined, many of the qualities of a courtroom scene are missing such as a grilling cross-examination of witnesses, two equally matched opposing attorneys, a surprise witness.  But, like any good courtroom scene it does have a surprise twist. Unable to get the information he wants even through the use of torture, Mitsubi, with the blessing of the Emperor, is willing to dismiss the charges and let the men go to a prison camp.  All they need to do to end the trial, and prevent future suffering is reveal the names of their commanders and their location. Captain Ross says they need to think about it. He has seen his men suffer enough and they are sent to the judge's chamber.

Ross tells his men the decision must be unanimous. Ross picks up a vase from the Judge's desk. If any flier puts in a broken wing, they will reveal the information. If one of set of wings is broken they will reveal the origin of the planes.  "Each of us must bear on his own conscience," he tells them. Each take their turn, and make their decision in private. No one will know who put in the broken wing.  They are brought back to the court. Ross tells the Judge if he finds one set of broken wings, they will speak.

The judge pulls out one, then another, then the third and with each full wing his anger grows. The final unbroken wing is pulled out and the judge explodes in anger. He asks Captain Ross if that was his final word. And what a lead in that is, for it gives the Captain the opportunity to speak. Ross delivers a dramatic, soul-stirring speech about the American character and perseverance and the men cheer jubilantly. Their cheers are cut short by a pistol shot:  General Mitsubi, true to his code, commits suicide. The men are led out of the courtroom and and with the Army Air Force anthem playing in the background, march confidentially to their fate.

The men will not be saved. It might be said that The Purple Heart was one of the last antiseptic, simplistic war films that marked the early years of our conflict in the Pacific. In less than two weeks after the film’s release the seminal documentary, The Marines at Tarawa was shown in movie theaters. The film used actual footage, and graphically showed scores of dead Marines strewn on the beach, and needed Presidential approval before it could be released to the public.

There are fine performances by Dana Andrews, and  Richard Loo, and it's always good to see a film directed by Lewis Milestone. The Purple Heart is a good movie and should be seen. ​ 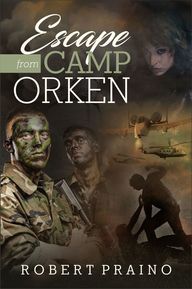 There is no worrying about getting a Purple Heart for taking a look at my book, ESCAPE FROM CAMP ORKEN.  Thanks.
"Fast action, good pacing, interesting plot, and a few twists and turns that kept me interested.
​